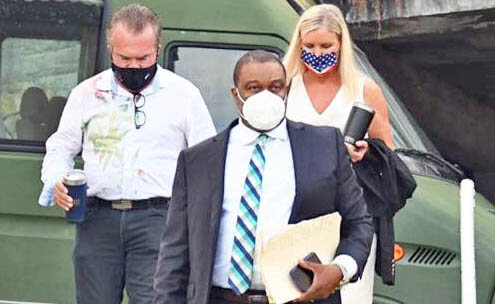 Acting Chief Magistrate, Teddy St Louis has said that the lack of proper implementation of the Law and protocols for the control and prevention of the coronavirus pandemic are to blame for the breaches of quarantine which have happened in Grenada.

The Magistrate offered the criticism as part of his comments during sentencing of two Americans, Dr. Timothy Mc Kinney and his wife, Amy Baxter, who pleaded guilty to breaching quarantine earlier this month.

St Louis said at least three matters of quarantine breaches have come before him for trial recently and in each case the evidence presented showed a lack of proper procedures.

The Magistrate called Grenada’s implementation of the Laws and Protocols as “flawed”.

“It’s a pity we don’t have people from the Ministry of Health here (in the Court Room). The problem is the flawed implementation of the protocols. There is nothing wrong with the Law,” he said.

Under the quarantine Act, section 81, the Minister of Health has the power to direct anyone into a designated place of quarantine for at least fourteen days.

The Magistrate said the “error” starts from the Ministry of Health’s website where travellers to Grenada make first contact in order to apply for home quarantine and for clearance to enter the country.

He said what is on the website is different from what actually happens once a person arrives in Grenada.

Up until recently the health travel website promoted a period of four days in quarantine, asking people to make paid bookings for State approved quarantine for that period while the entire process leading to being medically cleared and released from quarantine is actually for a longer period, up to seven days.

A number of persons left quarantine on the fourth day of the stay after the Ministry of Health failed to have test results available.

The confusion between the actual length of stay in quarantine and what was advertised by the Ministry of Health has been viewed as a contributing factor to creating panic in the population as infected people left without clearance and even infected others.

Another flaw identified by the Chief Magistrate is that while travellers are made to sign a document at the airport, done in the haste of arrival, they are not given a copy to take with them.

This raises the question about whether people always fully understand the conditions that they have signed to since they do not have another opportunity to review the document after leaving the Maurice Bishop International Airport (MBIA).

“The authorities have to fix implementation of the legislation,” he said, adding that the system lacks proper instructions and communication among health officials.

Recently, Health Minister Nickolas Steele publicly expressed that he expects the Judiciary, though acting independently, to not take lightly the prosecution of persons accused of breaching quarantine.

During Wednesday’s court hearing of the American doctor and his wife, Magistrate St Louis also commented on his responsibility on the Bench saying that he takes full responsibility for whatever sentence he hands down, guided by the evidence and the sentencing guidelines.

Fines against persons found guilty of leaving a designated place of quarantine have ranged from $2000 to $3000 and in the case of Dr. Mc Kinney and Baxter the fine was $5000.00 each.

Responding to the criticisms from the Bench on Wednesday, Minister Steele acknowledged that the system is not perfect.

“I have said that we are always working to fix things,” he said.

Recently, the Ministry of Health launched a web portal through which health travel is coordinated and increased the quarantine period stated on the website to seven days.

However, the issue of providing copies of the quarantine agreement to travellers has not been addressed.