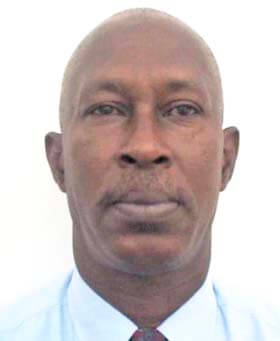 Two months after being elected as President of the Grenada Olympic Committee (GOC), long-standing sports administrator, Charlie George has quit the top job of the organisation which became riddled with a series of financial scandals over the years.

A copy of his resignation letter which was sent out late last night to several key members of the committee was obtained by THE NEW TODAY.

George took the job in October in a close contest against former local top boxer, Bunny Wilson, the only Grenadian to win a contest at the Olympic Games.

According to GOC insiders, 1st Vice-President Chenney Joseph who is the President of the Grenada Football Association (GFA) will take over as interim President until the local Olympic Committee holds its next annual general meeting and election of a new executive.

GOC is currently locked in a battle with the International Olympic Committee (IOC) over its failure to account for a grant of $440, 000 given by an affiliate, Olympic Solidarity (OS) for the development of sports in Grenada.

George took over the job from the long-standing President, Royston La Hee who served at the helm of the committee for 38 years.

In his resignation letter, George complained of presiding over a fractured Board of Directors (BOD) since election two months ago and accused some members of showing signs of just being power hungry.

“I urge national associations to be extremely careful of persons vying for elected office in the GOC. Do not just accept their utterances, promises, professional or other qualifications, but attempt to search their souls to find the motivation behind their seeking office,” he warned.

As a public service, THE NEW TODAY brings highlights of the Charlie George resignation letter:

I had no ambition to be President of the Grenada Olympic Committee (GOC) or to vie for that office. The damming report of the last Finance Committee which had numerous inaccurate statements, allegations and insinuations – some of which impinged on my character, impacted my decision not to vie for any position in the GOC.

I did not canvas for the position of President or ask anyone to vote for me. My agreement to accept the nomination for the position as President was given in good faith upon the encouragement of a number of members of national associations who are familiar with my record of decades of voluntary service to Sport, Culture, Education and the Development of our Youth in Grenada.

For those who are not aware, I have served as Deputy Chairman and as a member of several national carnival committees, Chair of the National Stadium Authority Board of Directors, Commandant of the Grenada Cadet Corps, Assistant General Secretary, General Secretary and President of the Grenada Athletic Association, and President and Chair of several other organisations.

I have never sought public recognition for my service and have always made every attempt to shy away from the public eye. My intention, as President, was to draw from my knowledge and experience in order to lead the GOC forward in a constructive manner.

Alas! By the written and spoken word, it appears that the BOD does not value my contribution. At our very first meeting of the recently appointed Board of Directors, I urged, being cognisant of recent events, that we make every effort to move forward in a productive fashion and to foster a harmonious working relationship with each other.

I was encouraged by the fact that all members endorsed the idea. It appears, however, that deep feelings of resentment continued to prevail. In the two and one-half months and eight BOD meetings since, I have met with haughty opposition, raucous behaviour, ill-discipline, untruths and vilification.

Some members of the BOD behave as if they were in the marketplace or fish house and have exhibited little respect for the presidency. Members have brought to bear seemingly personal grievances at meetings. One expects that there would be differences of opinion but also that these differences would be resolved in a gentlemanly and democratic manner.

Instead, there was name calling, threats, and very often downright disrespect. Generally, a sense of hostility prevailed. An outsider listening to any of these meetings would never believe that adults at such a level would behave in such a manner.

As Chair of these meeting, I have been non-combative and have attempted to be as dignified as possible in the circumstances. At present, the BOD is a fractured unit from which little will be achieved as it now functions.Your humble servant has come to the conclusion that some members of the BOD have no interest in furthering the cause of Olympism in our tri-island state, no interest in the improvements in our national associations or athletes, but a yearning for power, recognition, status, representation of the GOC in meetings and fora abroad – trips outside the state.

Their main objective seems to be to benefit from their association with the Grenada Olympic Committee. In E-mails, WhatsApp messages shared among members of the BOD and at meetings, some members have continuously cast aspersions on my character. That I cannot condone or have continue – hence my decision.

I do not feel that my continued presence will be of benefit to the GOC as progress cannot be achieved in this climate. Hopefully, my absence from the BOD will lead to more cooperation and effective management of the GOC.

I urge national associations to be extremely careful of persons vying for elected office in the GOC. Do not just accept their utterances, promises, professional or other qualifications, but attempt to search their souls to find the motivation behind their seeking office.In light of the above, I hereby tender my resignation as President of the Grenada Olympic Committee and a member of the Board of Directors with immediate effect.

My very best wishes to its Board of Directors, National Associations, Athletes, Standing
Committees, Volunteers, and well-wishers.