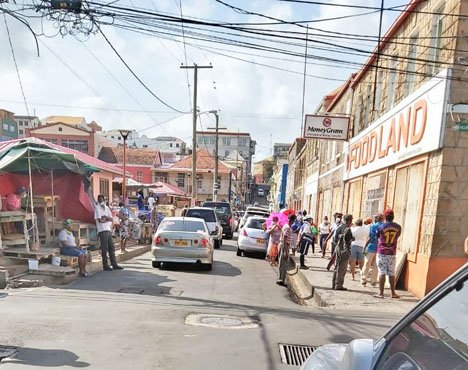 Grenada has introduced shopping by alphabetical order as health officials seek to close the window for the possibility of mass spread of the novel coronavirus.

So far the system has been inefficient and chaotic, raising worry that the virus could spread faster and rise above the current 12 confirmed cases.

On Wednesday, the police announced that a sequencing system has been adopted to allow people to shop based on the first letter of their last name starting with A to M, on Saturday from 8.00 a.m to 12 noon. Surnames from N to Z will have access to shops and supermarkets from 1.00 p.m to 5.00p.m.

Previously government had announced just one day for shopping during the current 14-days curfew but on Wednesday an additional day, Sunday, was announced.

Speculation is rife that this was done in order to accommodate religious worshippers whose Sabbath is observed on Saturday.

On Sunday, the same name sequence will apply with one difference. People with surnames from N to Z will be allowed access during the morning while A to M will shop in the afternoon.

Everyone must present personal identification in order to shop and those violating the name sequence will not be served.

Head of the Community Relations Department (CRD) within the Royal Grenada Police Force (RGPF), Superintendent Vannie Curwen told reporters at a press conference Wednesday that people are being encouraged not to engage in panic buying.

He said they have been assured by food suppliers that there is enough food in the country.

About a month ago, the Grenada Chamber of Industry and Commerce (GCIC) had issued a statement which said that there was enough food available to supply the nation for a six month period.

RGPF has said that the new arrangements for shopping are experimental and aimed at correcting the mistakes of the past two weeks which saw hundreds of people waiting for hours to buy food while breaching the social distancing protocol, which requires at least six feet of space between each person.

The authorities have also moved to correct the problem of shoppers being greeted by empty shelves as restocking was taking place on the same days as shopping.

Under the emergency powers regulations, supply trucks are now restocking on non-shopping days.

The 24-hour lockdown remains in place until April 20, while the State of Emergency will expire on April 21.

Health officials are hoping that the current measures to keep as many people as possible indoors will provide a better chance to keep COVID-19 at bay, while the exposure period for suspected cases wind down and more testing can be conducted.

With the exception of St David, everyone is restricted to their own districts on the two days designated for going to the shops.

Residents of St David are being allowed to cross into St George because the authorities are alleging that parish does not have sufficient shopping facilities to serve the needs of the people there.