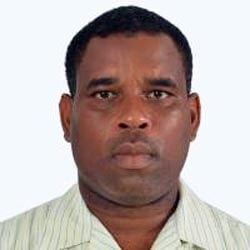 Engineer Shawn Charles has been selected to serve as Chairman of the corporate Board of the Grenada Electricity Company Limited and Minister for Infrastructure, Norland Cox says his lack of experience in corporate governance will not hinder the work of the Board.

The senior government minister confirmed the highly anticipated appointment on Monday of the former senior employee of the company, as its new Chairman.

While Charles has experience of 17 years in Grenlec’s Planning and Engineering Department and also worked for the National Water and Sewerage Authority (NAWASA), he is virtually inexperienced in corporate governance and management.

Charles, 48, is a PhD candidate in Civil Engineering and Infrastructure Studies, Disaster Resilience and Project Management and has a Masters in Geo-Informatics as well as an Executive Diploma in Management from the University of the West Indies.

The nine-member Grenlec Board was established about four weeks ago at the first AGM to be held since the government of Grenada regained ownership of the company.

In commenting on the choice of Chairman, Minister Cox said that Charles, as a former employee of the company, knows the inner workings of Grenlec and his lack of corporate governance experience will be offset by fellow Board members.

‘’As you are aware he is also a former senior employee of the company and has significant institutional knowledge of the company’s operations and staff.

‘’I think that is an invaluable asset at this time with significant support by the Deputy Chairman Devon Charles who has extensive experience and knowledge and certification in corporate Governance.

The new Chairman is expected to get support from other more experienced Board members such as Dorset Cromwell, an executive with the National Insurance Scheme (NIS) and Deputy Chairman Devon Charles who is also qualified and experienced in financial management.

Minister Cox said: ‘’This is not an individual operation but a Board of Directors that we believe is satisfactory, competent and have the requisite skillset to manage the company together with an outstanding group of Grenadian workers who are in more part responsible for the success of the company than previous management. The workers are always taken for granted in the company’s success by the public.’’

When asked why Devon Charles, who is qualified in corporate governance was not made Chairman, Minister Cox said he has other duties.

‘’You have to appreciate that these gentlemen have other extensive responsibilities otherwise. We were very fortunate to even get them to agree to serve at this time in the case of Devon (Charles).

At the end of last year the Grenada Government confirmed that it had taken back control of Grenlec at a whopping US$63m after a ruling by the International Centre for Settlement Investment Disputes (ICSID) agreed with majority shareholder WRB Enterprises that the Electricity Supply Act of 2016 would harm its financial position.

The original judgement of the tribunal including legal fees was set at US$75m however the Grenada government was able to reach a settlement to pay US$12m less.

Speculation is rife that the area of study of Chairman Charles is expected to be valuable in aiding the government’s planned transition to renewable energy even though he lacks corporate governance experience.

Government also announced that it would engage a management company through the World Bank and the International Renewable Energy Agency (IRENA) to deal with matters such as the public offering of government-owned shares and the development of renewable energy resources.