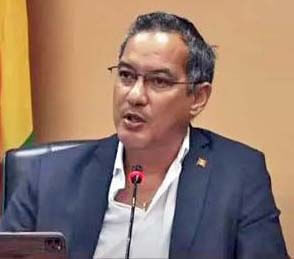 Health Minister Nickolas Steele - community behavior is to be blamed

In what can be considered a significant blow to efforts geared to use its once low COVID-19 infection status to attract more visitors, and revive the tourism industry, the Centers for Disease Control and Prevention (CDC) in the United States has issued a “Do not Travel” advisory against Grenada.

This blow against the island came due to the emergence of record-high levels of positive cases, and community spread of the deadly virus within the last month.

Grenada has seen exponential, and rapid deterioration of its COVID-19 situation, which has moved from the occasional identification of positive cases to daily additions of new cases above 100 per day in recent times.

Speaking in an exclusive interview with THE NEW TODAY, Health Minister Nickolas Steele attributed the increase in COVID-19 cases to illegal Carnival-like activities held in various parts of the island in July, and early August, which left the contact tracing team in limbo.

“People can come in (travel to Grenada as a) positive (case), picked up, identified, isolated. They may infect one (1) or two (2) people, they may infect a hundred people but we can identify those hundred persons, and isolate them but when we are dealing with thousands in the first event, with no record of who (we need) to go to, Jab didn’t register, Jab didn’t give us their phone numbers so we could call. Jab just played, and all of these illegal fetes, and gatherings were held, and we have no idea where to start, and that’s the problem,” he said.

Grenada had previously announced that unvaccinated visitors would not be given clearance to enter the country.

Minister Steele said that the new CDC rating is “not an entry protocol” and that “their (the CDC) advisory is to their citizens”.

“We are where we are because Jab must play…because of the mass events that occurred during the first two (2) weeks of August,” he said.

“So, I just want us to put things into perspective, although we have had outbreaks before, we were able to take control of it because they were small outbreaks and it didn’t have a series of super spreader events,” he added.

“This,” he explained “is what makes the difference,” noting, that “the policy on quarantine et cetera has been in place since May 1st”.

He pointed out that “the only thing that changed was that we have had a series of big unsanctioned public gatherings mass in the street”.

“What we had was all kinda fete (and) Jab Jab playing on weekends in July into August. So, we were crying wolf and playing with fire into August…,” he remarked.

The Health Minister also used the opportunity to point out that Antigua is seeing a spike too, noting that “they have had no change in their entry protocols”.

“Their spike was also in August because they opened up their beaches and Antigua Carnival is the same time (as in Grenada) and everybody went to the beach, and fete for days like we saw in Levera et cetera,” he said, emphasising the point that “community spread is dictated by community behaviour.”

“And that’s what causes a community to spread…“It is riskier to come to Grenada now than to stay in the US. So, Grenadians need to recognise that, it’s not about the foreigners coming here anymore”.

“We are now the source of infection to the world because of our community behaviour, and that is what the US and the CDC are saying…stay in the US where there is COVID as well because it’s worse in Grenada…and I expect the British to say so shortly, and the European governments because that is the reality”.

“Jab must play, Jab has burnt us, and we have to live with the consequences but we will get through it but we need to accept it and stop trying to blame people coming in.”

In a national address days before the CDC advisory, Prime Minister Dr. Keith Mitchell warned against the loss of the CDC rating, noting that although the borders remain open, “the current rate of infections could negatively impact travelers wishing to visit our country.”

He pointed out that “Grenada is now on the UK’s green watch list, meaning that we are at risk of being moved to the amber list, which stipulates quarantine measures for their returning nationals, a deterrent to leisure travel that will affect visitor arrivals and further impact the hospitality sector.”

“I want to remind you that as citizens, we have the power to stop COVID-19. We can control it through responsible actions, restricting our movement, wearing a mask or appropriate face-covering in public spaces, maintaining our physical distance, and washing or sanitising our hands frequently. Easy steps, which, if followed consistently by everyone, can immediately stem the current trend,” Prime Minister Mitchell told the nation.