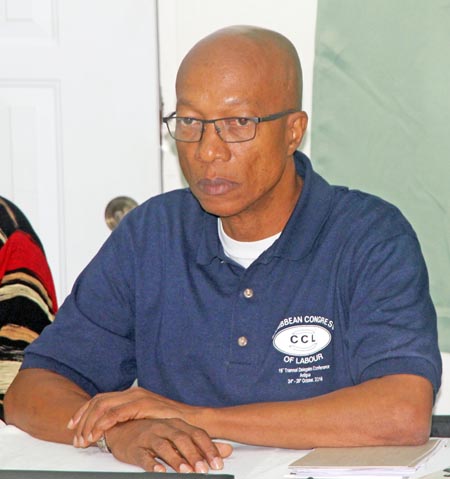 President of the Caribbean Congress of Labour (CCL) Andre Lewis

The Caribbean Congress of Labour (CCL) is seeking to find new ways to maintain the relevance of the trade union movement especially with the emergence of new challenges in a “new industrial landscape.”

This was the topic of discussion when the Andre Lewis-led body met on the island last week for its first 3-day meeting, since the election of a new executive in November 2019 and was the message taken to the Caribbean Community (CARICOM) Heads of Government meeting held in Barbados on Monday and Tuesday by Lewis and CCL General Secretary, Michael Annisette of Trinidad & Tobago.

Lewis, who is also a Senator in the Grenada Parliament and the President General of the Grenada Technical & Allied Workers Union (TAWU), said there are several initiatives in the pipeline aimed at “raising the consciousness of the workers.”

The CCL President said it is “important that members understand that the benefits that they enjoy today did not come about easily…we had to struggle and if we are not careful we are going to lose it as can be seen by the proliferation of contract work.”

According to Lewis, the fact of the matter is that there are still “contract workers who don’t enjoy those benefits” as their colleagues who are unionised.

He spoke specifically to the issue where some employers pay workers below the minimum wage requirement of $4.50 per hour for domestic work and $9.00 per hour for security guard service as stipulated in the Labour Code.

Lewis stated that in this day and age, unions leaders now have to look beyond the question of collective bargaining and agitation.

“We have to realise that the demographics have changed, there is a younger set of workers and we just cannot rely on telling them what we used to do in the past or what our foreparents used to do but we have to ensure that they understand what keeps them ticking, getting their involvement,” he said.

“We need to speak to them about career development, the importance of building their future, therefore, we need to be involved in finding ways to address social ills such as crime fighting, alcoholism,” he remarked.

Expressing similar sentiments, CCL General Secretary Annisette, who is also the General Secretary of the National Trade Union Centre of Trinidad and Tobago, made several suggestions that speak to the independence of the trade union movement and by extension the working class.

Annisette believes that in order to maintain relevance, bargaining agents must incorporate into its mandate an holistic approach to address mental and social factors affecting their members.

“And the question that I am asking is – why it is that the trade union cannot own a grocery for our members to compete with all of the other big groceries (or) build a child care center so that our single parents who have to go to work would have a safe place to drop their children? Why it is that we cannot intervene?” he asked.

“Why it is that we cannot speak to the issues of crimes and I look specifically at Jamaica and Trinidad and Tobago (in particular) because I believe that the role of the trade union movement in this new dispensation, in this new paradigm shift must speak to those fundamental issues if we are to be relevant as a body because if we are not relevant we are going to end up like the dinosaur.”

The Trinidadian-born CCL General Secretary also expressed the view that the time has come for Caribbean governments to engage the trade union movement in a “real tangible way” on issues affecting the economy instead of being the “body that handed down decisions that affect us.”

Speaking exclusively with THE NEW TODAY last week Wednesday (February 12), Annisette said, unless the trade union movement is “part of the decision making process…until there is a genuine recognition by the politicians, we will find ourselves in this predicament.”

He described democracy as “a daily occurrence” that involves the citizens of all the countries in the Caribbean region.

“Democracy cannot be and must not be a vote every five years…I think, until there is a recognition that Grenada or Trinidad & Tobago, or Guyana (and) all the other countries belong to each and every one of us…in other words we must always put our country first as opposed to putting our constituencies or our friends or our party finances above the country,” he said.

The Trinidad-based Cipriani College of Labour and Cooperatives Studies is currently serving as the secretariat for the CCL.

Head of Department of Labour Studies at Cipriani, Ian Daniel, who also attended the Grenada meeting, said supporting the CCL (and) helping to contribute to the institutional strengthening of the body and its affiliates throughout the region “is an important part of the college’s move throughout the region.”