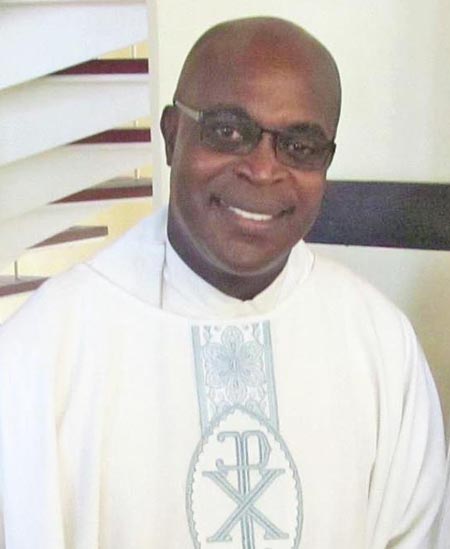 Fr. Andrew Barnard – made a plea to the local media fraternity

Roman Catholic priest, Father Andrew Barnard has urged the local media to downplay sensational reporting and to focus more on positive things happening in the community.

The clergyman made the plea Sunday as he delivered a sermon to mark the start of Media Week organised by the Media Workers Association of Grenada (MWAG) under the theme, “The Critical Role of the Media in COVID-19 Pandemic”.

Fr. Andrew said he was noticing that the newspaper were focusing too much on “the bacchanal and the scandal” in their front pages and not on the good things happening in the country.

“…Let us see a man chop a man they are there – that sort of thing. Let it not always be that of excitement and bacchanal because often what comes out it seems to be the excitement,” he said.

The priest went on: “If you look at the cover of the newspaper – it is what sells – they put something that excite … not Fr. Andrew giving a blessing in the town of St. George,” he told the congregation that included two members of MWAG.

“…I encourage you … to bring out not just the bacchanal and the scandal as media personnel but to bring educational and uplifting stories … stories that have positive impact on humanity,” he said.

This year’s week of activities by the media association has been scaled down due to the State of Emergency imposed by government in the face of the threat of the coronavirus pandemic.

Fr. Barnard also reminded members of the media about their historical role to inform the nation in an impartial manner.

The clergyman said: “I want to encourage media representatives who are here and those who are listening to us – as an independent body which you are – let your news coverage be balanced, not biased – non-partisan.

“Let your news reporting be fair – be fair in what you report… in other words get your facts before you report. You are playing a vital role and I really commend you for that. Stand and fight for the voiceless especially the poor which you have been doing”.

Fr. Barnard also reminded the media that the work they produce and bring to the attention of the public can also land them in trouble by those who feel threatened.

“You highlight various issues – and had you not gone out there and risked your life – and there are many of you who have been attacked as a result because you put thing in the forefront. You go into harm’s way to inform us of what’s going on,” he said.

The priest was also critical of those media houses that refuse to react to calls by members of the society to provide coverage of their events.

“I have heard many persons say, you know I call this media house, and I call this radio station, or and I call whatever media facility personnel – ah still waiting. If something good is happening in the community and we call them … well they will (say) let us know.

According to Fr. Barnard, he recognises that the media houses and their workers “are playing a vital role and I commend you (for the) … very important role in our nation.

“You bring the stories to us at our doorsteps… in our faces and thank God for technology … it is on our phone. Before it happens we already have it live and direct and we thank you very, very much for that…” he said

“… I wish you all the best as you celebrate Media Week under the theme that you have chosen – May all that you plan for this week materialise, come to fruition,” added the St. Lucian-born priest.

The Roman Catholic Church in Grenada is part of the local media landscape with its own radio station at Morne Jaloux in St George and its small printing facility at the head office of the church on Church Street in the city.