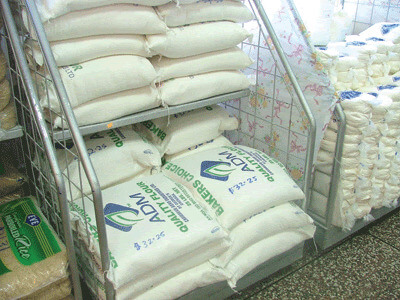 A typical bag of flour produced at Caribbean Agro Industries at Mt. Gay

The planned increase in flour and poultry product prices from Caribbean Agro Industries (CAI) did not go into effect today as announced by the company last Friday.

The island’s sole flour mill has been coming under fire in the public for the sudden manner in which the increase in prices was brought into the public domain.

The first hint that CAI had not implemented the new price regime came from the President of the Grenada Association of Poultry Producers (GAPP), Jason Phillip in a circular sent out to members of the body a few hours ago.

Phillip said that he visited the company’s Sales Office at Mt. Gay, St. George’s this morning to inquire about the expected price changes but was told that “management has instructed that all prices remain as per previous posted until further notice”.

Phillip told GAPP members, “We currently await official communications from the company and government as to the course of actions which will be taken moving forward.”

The Poultry Association boss and the farmer’s representative in the Grenada Senate, Roderick St. Clair held a joint press conference on Monday in which they took issue with what was styled as the rather abrupt and inappropriate manner in which CAI announced the price increases.

Sen. St Clair called for the Keith Mitchell-led government in St. George to bring an end to CAI’s monopoly on flour and poultry feed in the country.

Phillip made a plea to the ruling New National Party (NNP) administration to “place a stay on the company’s decision” to increase the prices of its products on the grounds that farmers and consumers of the products did not have sufficient time to debate and adjust to the price increases.

When contacted Wednesday by THE NEW TODAY to find out what prompted CAI to put a hold on instituting the price increase, a company official in a rather hostile tone, said, “We are not in a position to speak to the media”.

Under the new price structure that was announced by CAI, the price of Baking Flour was due to increase by 10%, Cooking Flour (12%), Poultry Feed (6%), Hog Feed (12%) and all other feed produced at the local mill by 16%.

The company had indicated in a letter sent to government that it was forced to increase the price of its products due to “developments occurring on the international grain market which is having a profound negative impact on the cost of sourcing key ingredients for manufacturing flour and animal feed.”

The letter went on: “The key inputs that go into our manufacturing processes are wheat, corn and soymeal. However, declining production of and simultaneous increased demand for these commodities have caused prices of these inputs to soar to high levels over the past few months.”

Speculation is rife that the Ministry of Trade has stepped into the matter and talks are taking place with CAI officials on the issue of the price increase.