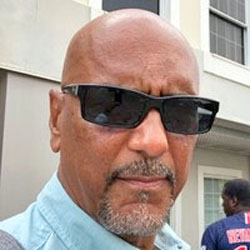 Byron Campbell – back on the GCNA Board of Directors

Incoming member on the Board of Directors of the Grenada Co-operative Nutmeg Association (GCNA), Byron Campbell has identified the giving of assets to farmers as key in the forward movement of the body in the coming months.

Campbell who is one of the three government representatives serving on the nine-member Board said that he had been making an effort when he was its Chairman a few years ago to place the assets of the association in the hands of farmers but did not accomplish the task.

He told THE NEW TODAY that there was a study that was done that looked at the capitalisation of GCNA to give farmers a greater stake in the industry.

He said the study came up with recommendations on how to capitalise the assets and distribute it to the farmers and provide certification for the farmers to give them ownership of the industry.

He stated that one issue that had to be considered in the mix is those farmers who had died several years ago.

“What we talked about is where do you cut off? Do you award the certificate or their shares to their estate? I think that was the discussion. It wasn’t a question of whether you do it or not but more the modalities,” he said.

“It’s important, it is something that certainly is back on the agenda. I think it is important – we have to stop talking about it and do it. I will like to see some action – something done,” he added.

Campbell denied that the issue of assets for farmers had failed under his leadership as Chairman but said that it should be seen more or less in the context of part of an overall process.

He said that all the recommendations and way forward on how the issue of the assets should be addressed are well documented and still there to be looked at in terms of going forward.

”This was clearly a priority of the board up to the time I serve,” he remarked.

The Keith Mitchell-led New National Party (NNP) government has identified the distribution of assets to farmers along with the merger of GCNA and the Grenada Cocoa Association (GCA) and Liberalisation of the industry as its priority areas in pushing forward with the sector.

Nutmeg farmers have rejected the ideas of Liberalisation and Merger following the leak of a draft bill which placed sweeping powers in the hands of the Minister of Agriculture, Yolande Bain-Horsford to take control of the new company to be set up on the dissolution of the two commodity bodies.

The Cabinet minister was also given the sole authority in the first bill to issue export license to persons who wanted to engage in the export of nutmegs and mace.

GCA has opted for merger on conditions that there was no liberalization and the monopoly to sell cocoa remains with the cocoa association.

According to Campbell, he is in a good position to make a contribution on the contentious issues between the State and the farmers in light of the fact that he understands both sides of it.

“I am not there in a vacuum, not understanding the physical plight of the people that are involved. My role is to bring some of my knowledge particularly my management skills in terms of seeing the transformation that farmers are asking for right now,” he said.

“…We have to be very careful as we go forward – take on board the sentiments of the farmers in particular. We can’t be arrogant about it,” he added.

Campbell cautioned that the way ahead in the industry has to be consultation with the stakeholders.

He also announced that he had started discussion while as Chairman on a Pension scheme for the farmers and the creation of an account to support the children of farmers in terms of scholarships.

Campbell said that a lot was attempted during his tenure with GCNA which in those days were producing 2300 tonnes of nutmegs per year prior to Ivan in September 2004 unlike the current situation in which only 450 tonnes per year is produced by the island.

According to Campbell, the nutmeg business has dropped significantly on the island and that the value of fish exports was more than nutmegs at the moment.

“The value of the industry has been shrinking and shrinking – it’s nowhere near where it used to be. So I think the focus now has to be on how we consolidate, how we ensure that what we have we get the maximum value and added value,” he said.

Asked why the industry is on the decline, he said that it suffered a severe blow from the passage of Hurricane Ivan in 2004.

Campbell also said the industry is labour intensive and requires long-term investment and timeframe for production and the younger farmers lack the patient for that type of business.

According to Campbell, the young people “want immediate gratification – they’re going into production (of) short crops – things that give them a quicker return.

He also identified access to land as another problem facing the industry in terms of trying to increase on the production.

“The truth is that a lot of farmers don’t find nutmegs attractive in terms of the value for them in the short-term and we have a problem with access to land,” he said.

The new GCNA Board member noted that there are a lot of idle lands around the island which the landowners have not put back into production and can be considered as semi-abandoned.

Campbell said that persons who might want to go into nutmeg production might not have the land to do so and would also take into consideration the low price for nutmegs on the world market and the uncertainty of the industry.

He said the situation has also reached the stage where GCNA is no longer buying nutmegs from the individual farmers on a regular basis but only every other week.

On the issue of the plans being discussed for over a decade to put together a Land Bank for agriculture to provide lands for nutmeg producers, Campbell said that the UN Food and Agriculture Organisation (FAO) has been working with government for some time now to set up the mechanism.

The Land Bank, he said is needed to encourage people with idle land to register this land so that an Authority in which it will be vested will then be able to manage the leasing of the land and collect the funds from farmers.

Stating that Grenada has a lot of absentee landowners, Campbell is confident that “this kind of management arrangement might be an option for this” badly needed effort to bring more agricultural lands into nutmeg production.

He suggested that there is a dire need to see an increase in the price for the commodity to once again attract persons to the nutmeg industry.

Grenada has now dropped from 2nd or 3rd position in the production of nutmegs in the 80’s and early 90’s and is now at position 8th in terms of world production.

“We are way behind now so we don’t call the shots anymore,” he said.

Late GCNA Chairman Norris James and his deputy, the late Clarence Ferguson had travelled to Indonesia about 35 years ago to broker a deal in which the two producing countries controlled the price on the world market.