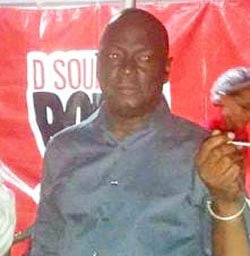 Lingham Samuel – a top member of the Congress party

Business Development Executive, Lingham Samuel has called for the “total revamping” of the budget process and the way in which the debate is handled in the public domain.

Samuel, who is a known supporter of the National Democratic Congress (NDC), made the call amidst ongoing debate on the $1.2 billion 2021 budget presented in Parliament earlier this month by newly installed Finance Minister Gregory Bowen.

Speaking with the radio host of the NDC’s Heartbeat programme on Sunday, the activist expressed the view that “the approach and the way in which the budget is conducted has to be totally revamped,” also citing the need for a “review of previous budgets” to ascertain its performance or lack thereof.

“Look at what has happened over the last four years 2016-2020. The government has stated time and time again that we have seen growth rates of 5% per year (so) over four years that’s 20%, but the budget has not moved more than 3%… and there is nothing to show for the growth,” he said.

Making obvious reference to the theme of the 2021 budget, “Towards Vision 2035: Recovery, Transformation and Resilience,” Samuel explained that “the budget is for the year…but the allocations for the objectives for the year fits within the context of an overall plan going forward.

“So, if you have a plan for the next five, 10 years and there are pieces that you need to put in place…so, you start this year’s budget, you have an allocation, you set out some objectives and then at the end of the year you review your progress and then the subsequent year you have a follow through on that item to accomplish the task, which is not necessarily a task that could be accomplished in one fiscal year.”

“And we have been observing this year on (after) year. (There are) no review of previous performance…on many occasions you have situations where they (government) achieves nothing but the budget for a particular activity was used for a different purpose (and) they don’t come and tell us about that.

Noting that “government is in perpetuity and national objectives does not have a party political colour,” Samuel declared that “the nation must be afforded the courtesy respect from our leaders to report fairly and thoroughly on their tenure.”

The NDC activist also expressed concern with the manner in which Members of Parliament (MP’s), have been contributing to the budget debate over the years, stating that they are supposed to “report on what they have done in their different ministries and constituencies (but) many of them cannot report because they have done absolutely nothing.”

“And then, you have the constituency allowance given to the MPs (Members of Parliament) and there is no report anywhere, as to how these monies were spent and that is taxpayers’ money and we need to know what it is used for,” he said.

“Tell me how much you have accomplished and if you cannot do that then it’s a waste of time. So, I am calling for a review of previous budgets to be conducted in relation to its performance or lack thereof and how you (the government) intend to correct and amend going forward.

“So, as far as I am concerned, I don’t waste time trying to opine on this year’s budget. It is a complete waste of time (and) is not worth the paper it is written on.