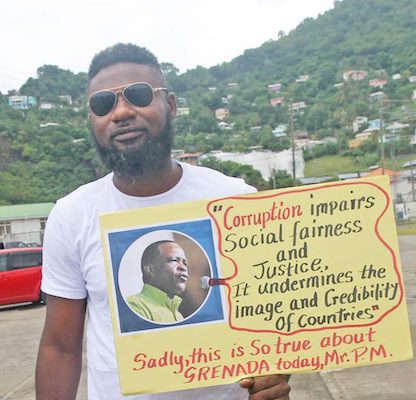 Earl Maitland – claims he is a victim of the Integrity Commission

Leader of the Grenada Empowerment Movement (GEM), Earl Maitland would like to see new persons appointed to the Integrity Commission, which he has labeled “one of the most corrupt bodies in Grenada.”’

“I am a victim of the Integrity Commission…as recent as last year I reported some corrupt activities that occur in the public service and I was denied access to justice”, he said.

“In fact, what the Commission actually did was waste taxpayers money or whatever monies they have collected from donor agencies and paid to do an ad on the two television stations about me,” he added.

The statement, referred to by Maitland, was released by the Commission approximately one year ago and repeatly broadcasted on the Grenada Broadcasting Network (GBN) and Meaningful Television (MTV) by Deputy Commissioner Robert Robinson.

The Commissioner claimed that Maitland did not comply with the requests from the Integrity Commission, hence his complaints could not be thoroughly investigated.

“We do need some sort of Justice here and we clearly cannot get it from the persons who are in the Integrity Commission at this time”, said Maitland about the body.

“…I would personally like to see new persons appointed or they should just close down the entire thing,” he added.

Maitland went on: “This is one of the bodies…appointed to deal with corruption (and) I believe it is major waste of taxpayers’ monies or wherever they get the monies from – it’s not clear but it’s rather unfortunate and I would like to see that persons actually understand the implications of having persons parading as a knight and shining armor for a country that really needs help.”

Maitland indicated that he has filed complaints with the Integrity Commission about a number of individuals including the Ombudsman, government ministers Nicholas Steele and Oliver Joseph and former Attorney General Dr. Lawrence Joseph and Labour Commissioner Cyrus Griffith.

When contacted by The NEW TODAY last week Tuesday, Operations Manager at the Integrity Commission, Elizabeth Henry-Greenidge affirmed that the Commission is in the habit of investigating all complaints made to it.

She, however, said if it is determined that the complaint does not fall under the purview of the Commission, meaning a complaint made against a person who is not in public life, then the person who made the complaint is advised accordingly.

Greenidge, a former Cabinet Secretary, pointed out that she was not in a position to speak directly to the status of Maitland’s complaints.

Maitland alleges that even after being recorded in an interview that lasted for approximately two and a half hours at the Integrity Commission on March 15, 2018, he has complied with every request made by the Commission thereafter, via emails, including the points of law that have been breached by the persons whom he did complain about.

“They were telling me that they are unable to investigate the matter until, I, the complainant, was able to include in the emails what laws the persons broke.. they said it was not their job to point out the laws that were broken but it was my job as the complainant to present that information in my complaint. So, basically they were just beating around the bush, trying to frustrate me, but I went through the laws and I did what they asked,” Maitland remarked.

However, Commissioner Robinson, in the 2018 statement told the nation that “to date, the Commission has not received the requested documents” from Maitland, who instead proceeded to provide the Commission with the entire Code of Conduct.

“Well the Commission cannot decide for Mr. Maitland which section or sections he believes were breached,” Robinson said, pointing out that “the Integrity Commission has not reneged on our responsibility to Mr. Maitland but we are waiting for him to provide us with the documents so that we can proceed to address his complaint”.

Robertson stated that the “Commission cannot act on word of mouth but must have the supporting documents to investigate a complaint.”

Maitland’s complaints to the Integrity Commission stemmed from a 4-year-old dispute surrounding his dismissal as an employee of Aviation Services of Grenada Ltd. (ASG), in which he alleged that the company failed to honour a recommendation from the Ministry of Labour to pay him a sum of monies, estimated to be approximately $40, 000.00.