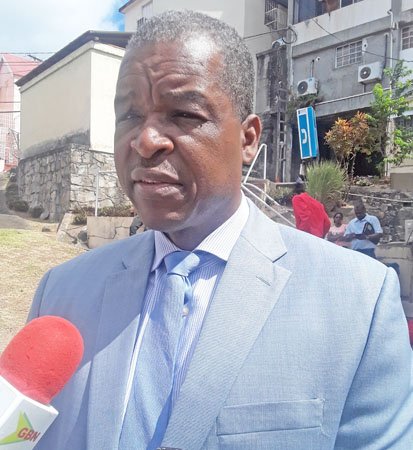 Outspoken Attorney-at-Law Jerry Edwin is calling for the banning of IP addresses in Grenada belonging to free sexually explicit websites, making it absolutely necessary for persons to have a debit card to get access.

Edwin, an American-trained lawyer, who operates the law office Eden Law Caribbean at the Bruce Street Mall in St. George’s, sees this as a solution that would help to eradicate sex crimes in the country, especially among under-aged girls.

“Please do like our friends in China…So, that one must have a debit card to pay the three or four United States dollars to be able to access pornography…at least we will have some parental control over what children are being exposed to,” he said in an exclusive interview with THE NEW TODAY last week Friday.

The attorney pointed to the theory of psycho-social experts that “young minds are incapable of resisting these images and would want to experiment with them.”

“That is what all the psycho-social experts have told us,” repeated Edwin, who expressed the view that “we are in a society where we see girls of very tender ages engaging in sexual conduct or at least it is coming to light.

“But I suspect that it has always been the case in Grenada and elsewhere in the Caribbean, that girls of very tender ages are exposed to sexual activity. We are not talking about assault, rape, or (someone being) forced, we are talking about young people being engaged in sexual conduct.

“The fact is that people are having sex, our calypso, our soca, our dancehall – the images on our cell phones all speak of a heightened sexual sensibility of the larger society and consequently, young people.

Attorney Edwin’s comment came on the heels of a commitment by Acting Commissioner of Police, Edvin Martin to intensify efforts to eradicate the scourge, as sexual crimes continue to be dominating category of offenses currently before the High Court.

Commissioner Martin expressed “deep concern” about the level of violence in general but specifically the acts of violence among women and children.

“I cannot sit comfortably when adults continue to abuse minors especially those under the age of 16, when 84 of 181 cases before our High Court are sexual crimes – many of which involves victims under the age of 16 and currently 10 of the 26 newly added cases to the list are also of a sexual nature,” The police chief told reporters at a press conference held last week at Police Headquarters in St. George’s.

However, Attorney Edwin, who is also gravely concerned with the dominance of sexual crimes against minors on the assizes list, agreed that “the book should be thrown at a child molester,” however, he said although the law stipulates 16 as the age of consent, in most cases under aged girls, who ultimately engage in sexual frolic with persons around the same age group, are not forced but do so willingly.

According to the attorney, in such a situation between these two teenagers, “this is not a matter for the criminal court.”

“So, when we get these reports about these young boys being arrested by the police for having sex…and they are saying that if the girl is less than 16 cannot give consent, immediately the apparatus of the state, the police swoop in and arrest the boys (and) I believe that the police are not exercising the kind of necessary discretion that we have used in the past,” he said.

The often outspoken attorney suggested that “the proper authorities to which matters like this should be referred is the entire architecture and network of the Ministry of Social Services, the Child Protection Authorities (CPA) and religious communities”.

Edwin also cited the need for proper sex education to be taught in schools because “we are in a culture and a society that (under-aged) children are having sex.”

“Sex education today cannot be about anatomy or biology – it must be about condoms placed over bananas. We have to take a green banana or a ripe banana in the shape of a penis and bring it in the classroom with a condom and show the girls that whoever they decide to have sex with is using a condom, because we cannot stop them from having sex.

“Secondly, we have to ensure that these young people learn the virtue of abstinence – that is no sex until you are married or until you are an adult. We have to tell them the virtue of it and number three, we have to expose these young boys and girls to how their future success can become truncated with the natural outcome of sexual conduct that is pregnancy, fatherhood and motherhood at a young age.