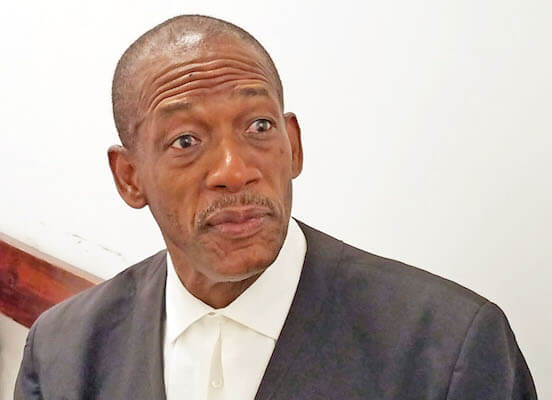 Hood, who was also on the boat for the cruise, was speaking to THE NEW TODAY, hours ahead of today’s appearance at the No.1 St George’s Magistrate’s Court by the six Trinidad nationals who have been charged with causing Harm to the world renowned athlete who is a double champion in Javelin.

Chief Magistrate Teddy St Louis has decided to cut short his holiday vacation to take charge of the court proceedings which have generated worldwide interest and attraction.

According to Attorney Hood, he is waiting until the court hearing begins to see if the police will not bring charges also against Anderson Peters as “there was a fight (on the boat) with at least three Grenadian people involved – we have the identity of the third person.”

The third person, he said, “punched people” and the police have not picked them up for questioning in the incident.

“If that does not happen I will file private criminal proceedings tomorrow – you can quote me on that,” he said.

“If indeed they want war and Anderson wants his name to be out there, let them go ahead,” he quipped.

Police have slapped charges on John Alexander, 55 years, Deckhand of Arima, Mikhail John, 35 years, Sailor of San Juan, Noel Cooper, 42 years, Captain of Gurpe, Lance Wiggins, 45 years, Sailor of Cocorite and Sheon Jack, 28 years , Sailor of Cocorite were all charged with one count each of Grievous Harm and Stealing, while Abiola Benjamin, 40 years, Operations Manager/Police Officer of Maraval was charged for Assault on Anderson Peters.

Video footage which surfaced minutes after the incident showed Peters being beaten by crew members of the boat before he ended up in the water.

Attorney Hood who has been retained by the Trinidadians along with two other local lawyers said he strongly believes that Peters should be charged as the person whom he singled out as being pivotal to the incident that unfolded.

THE NEW TODAY understands that Hood intends to approach the Prosecution to join him in a closed door meeting with the Chief Magistrate at the start of the court proceedings to try and resolve the matter and to avoid a long drawn out court battle which might be detrimental to the career of the world’s Javelin Champion.

An authoritative source said that the former Attorney General under the 2013-19 New National Party (NNP) administration is not against a diplomatic solution being worked out alongside the lawyers involved in the matter to bring an acceptable conclusion to the proceedings.

“I fear for the reputation of Mr. Peters. This thing is up in the air and I am very concerned,” said a well-placed legal official.

He wants to see the Anderson Peters matter settled “diplomatically, away from the madding crowd in order to preserve the reputation of what people call a national hero.”

The defense team is also claiming that the Prosecution has not given them any disclosures in terms of statements in the matter as is customary.

On the night of the incident, Anderson Peters is said to have had two brief conversations with Attorney Hood on board the Harbour Master while out at sea and before the brawl on the vessel.

Hood’s son, Benjamin who is also an attorney-at-law and is retained in the court matter is a former national shot putter who represented the island at the CARIFTA Games.

Benjamin Hood is said to be a former training partner of the world’s No.1 Javelin thrower.