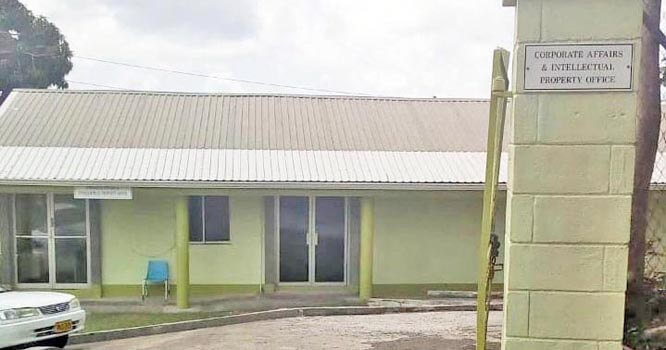 CAIPO building at the foot of Mt Wheldale in St. George’s will house the new pension secretariat

The Corporate Affairs and Intellectual Property Office (CAIPO) at Mt Wheldale, St. George’s will house the new pension secretariat to be established by the Ministry of Finance as the ruling National Democratic Congress (NDC) government of Prime Minister Dickon Mitchell moves to make retroactive pension payments “on or before November 30th.”

This disclosure was made by PM Mitchell, who is also the Minister of Finance, when he met with over 250 private sector representatives for a luncheon on Tuesday at the Grenada Trade Centre for a Grenada Chamber of Industry and Commerce (GCIC) organised business luncheon.

The Grenadian leader used the opportunity to announce that his Cabinet has agreed to the setting up of a pension secretariat to allow for the efficient roll-out of pensions, and outlined the controversial pension issue among those that the new administration intends to follow through on.

“Our target date for actual payment is November 15, which allows us an additional two (2) weeks in order to do any mopping up or wrapping up that has to occur,” said the Prime Minister, who expressed confidence in the “competent and capable” team now under his leadership at the Ministry of Finance.

“The Ministry of Finance will be setting up a pension secretariat. It will be housed at the CAIPO Office conference room,” the Grenadian leader added, noting that “it (the secretariat) will be properly staffed to allow for the processing of the necessary paperwork to back this (initiative).

The controversial pension issue was the point of focus during a discussion involving members of the former New National Party (NNP) government, which was hosted by the main opposition party on social media last week Wednesday.

According to former Minister of Finance, Gregory Bowen, based on information provided to the International Monetary Fund (IMF), a preliminary report from the Fiscal Affairs Department pointed out, that “in 2022 alone, the total outlay (of the pension expenditure) on the government could range from 2.2% to 7.9%.”

Bowen said the IMF report projected several scenarios that can come into play for example “in 2022, if all who are eligible to retire does so, the government could face a situation where it may have to pay out “$253 million,” an additional “$51 million in 2023,” noting that the figures are estimated to increase to “$90.8 million” by “2030.”

“So, as you go down the line the figure would increase – debt on the state would be something like $798.2 million – these are IMF figures (and) we have clarified that these are preliminary figures,” he remarked.

Former Member of Parliament for St. Patrick West Anthony Boatswain, an economist by profession, and a former Minister of Finance also chimed in stating that, when considering the liability to the government inclusive of 2022, “and when we look at all of the factors, who will be retiring, at what age, those who would have retired and now have to come on because if I retired two (2) years ago, there is an arrears of payment you owe me, backpay, but you have put me current and move me forward for 2022…automatically, I should become part of the system, in addition to those who would be retiring in 2022, and if you look at that figure and add it up inclusive of that $60 million, you would come to a figure of roughly $465 million.”

Boatswain contended that if the $60 million in retroactive pension payments are correct, and the government only pays the $60 million this year, it will carry forward huge arrears into 2023.

“And, that is what the experts are saying, how do we treat with that huge backlog, and not carry it over into 2023, because $60m alone would leave you with outstanding arrears moving into 2023 of over $400 million,” Boatswain added.

The former NNP administration estimated that the Congress government would have to budget for an estimated $120 million in order to remain concurrent with the paying of pensions.

Prime Minister Dickon Mitchell has affirmed that the necessary work is being done to assess the pension situation in the country, and has given assurance that his government is committed to making the payments.

Acknowledging that there will be push back against some of the initiatives that his administration has championed during Tuesday’s business luncheon, the Prime Minister stated that “as a new government, and as one that has championed transformation, my challenge is not to get bogged down in the minutia of granular details that don’t advance or transform the country, and we can only do so by having a clear sense of what our goals (and) policies are…”

“So, I appreciate some of the things we have championed will meet with resistance, that’s the nature of change that there will be friction but I can assure you that we will consult, we are happy to debate (and) to hear the other side of the coin but what we will not be prepared to accept is no for us as an answer. We have to be solution-oriented, we have to find answers to the things that we want to accomplish,” the Grenadian leader added.

PM Mitchell also spoke of plans to open the next session of parliament “on or before the end of August” to facilitate the passage of supplementary appropriation bills that may be required to address the paying of the pensions.