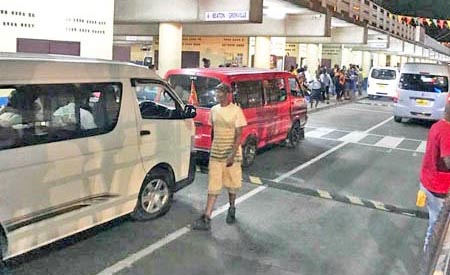 The National Bus Association (NBA) is believed to be happy with the new tone being adopted by the Ministry of Transportation and the Transport Board in their discussions to resolve a number of problems facing public transport in the COVID-19 period.

A source close to the association told THE NEW TODAY that when the two sides met on Monday the busmen came out from the talks optimistic that progress can be made in going forward.

“We’re sounding like we are heading in a better direction now,” said the source who added that the meeting was more “futuristic” and “so far, so good”.

He described the session with the government side as “a step in the right direction, it was a “positive” meeting and progress was being made in charting the way forward.

Two weeks ago, the government said it was putting on “pause” the talks with the busmen for holding a press conference to inform the public about their grievances.

After a one week break, the government side called on the bus association to put back more buses on the road as a sign of goodwill that it was prepared to sit once again with them to try and resolve their differences.

According to the source, it was clear from Monday’s meeting that the government side had departed from the norm in previous sessions of informing busmen that what was put on the table was all that can be done, it cannot be changed and it was a matter of leave it or take it.

He said the tone of the meeting was now “sounding more solution-based” and the government side has started to work immediately on some of the concerns raised by the bus operators.

“It’s just positive. That’s the first time I have felt that vibes from the meetings,” he added.

The busman pointed out that one immediate step taken on the part of the government side was to address a concern raised by bus drivers and conductors of passengers entering the bus and refusing to wear masks and not wanting to sanitise their hands.

He said the Transport Board moved swiftly to put out a public statement urging people to wear their masks when in the public domain and warned that tickets will be issued to violators.

He added that the busmen got assurances that there will be more random checks on the routes by the police to make sure that the protocols for public transportation are adhered to by those travelling on the buses.

“I can’t see no problem with it (random check) because in terms of safety – we want everybody to be safe.

According to the busman, the bus operators do not want any bus driver or conductor to get affected by the virus and especially as the government is taking steps to re-open Grenada’s borders to the outside world.

“Once the borders open up, if we don’t have proper protocols in place it will just be chaos,” he said.

The busman also pointed out that not all buses are back on the road fully and NBA is about to unveil a plan for the rotation of buses to give more bus operators an opportunity to make some money.

Stating that the buses are currently operating at a financial loss these days, he said, “buses ain’t making no money, bus is bussing (financially) and the men just hanging on right now by a thread”.

He disclosed that the police have offered to assist with the execution of the rotation plan out of concern that some bus operators will be inclined to want to work every day.

“We are going to work, day in, day out so everybody could make something sustainable for themselves,” he told this newspaper.