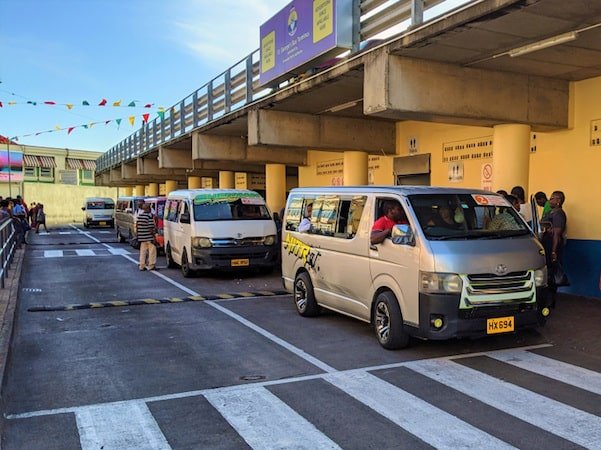 Busmen at the main terminus at Melville Street in the city

Tuesday could be a crucial day as government and bus operators hold a meeting in an effort to get most of the nation’s buses back on the road to provide public transportation in the country.

The National Bus Association (NBA) has requested its members to remain off the road until agreement could be reached on a number of outstanding issues including a small hike of $0.50 per fare.

Speaking at a press conference today, President of the national body, Garth Woodroffe rejected claims being made in some quarters that the busmen are too greedy and should be thinking of the nation in this period of COVID-19.

According to Woodroffe, the busmen are being asked by the authorities to commit “financial suicide” by trying to get them back on the road to operate with reduced earnings and at higher costs to operate their buses.

He pointed specifically at the new regulations which call for each bus to now carry reduced loads on every trip on their designated route.

He cited a glaring irregularity in the legislation coming from government that was put together by the Office of the Attorney General and that coming from the Traffic Department of the Royal Grenada Police Force (RGPF).

Woodroffe said the interpretation of the published document from the office of the AG speaks of only eight passengers being allowed on one trip but the Police are referring to ten passengers plus the driver and conductor that can be facilitated on every trip.

The President of the busmen association stunned reporters when he said that those bus drivers who were called out in March to provide transportation for Essential workers like nurses were paid only EC$17.00 per trip on most of the routes except Sauteurs which was put at $23.00 per trip.

According to Woodroffe, each bus was required to make six trips per day to transport these workers and the buses will normally full up their vehicles every two days at a cost of $100 to $175.00 depending on their location in the country.

“The price that was offered (to the busmen) was no way close to what the expenses will be,” he said.

He claimed that the busmen were forced to finance these trips all on their own in the initial stages because no money was received from government even at the end of April for their service in transporting the Essential Services workers.

Woodroffe said that some busmen have not even collected their payment cheques from government as yet due to the fact that things have not returned to normalcy on the island.

On the thorny issue of $0.50 increase on fares, the President said that bus operators are the only sector of the economy that has not seen an increase in prices in years although the cost of everything for them has increased including the price for a new bus, as well as gas at the pump.

Woodroffe said that the last increase for bus operators dates back to 2005 and 5 years later some are opposed to the small increase although it was being done simple on the basis of economics and financial considerations.

He referred to several proposals put forward by the busmen including the need for gas rebates, a waiver on fees to operate in the Bus Terminal and a different seating arrangement to help ease their financial burdens in COVID-19 as they seek to provide a service to the public.

Woodroffe spoke of the Minister of Transportation, Gregory Bowen, who is the Number Two man in the government, only taking part in one meeting with them during the crisis and left after only five minutes.

According to the NBA President, some bus operators were reluctant to come out and work due to fears about the coronavirus and he praised those who came out to provide a service in the national interest.

“We did it without asking for pay initially,” he quipped.

The President said that the busmen were also proving the service in the face of pressure from the police who were still issuing them with tickets for alleged violation of traffic regulations.

He stressed that some busmen used to hide to go to mechanics to do repair work on their vehicles to keep them on the road for use by the Essential Services as mechanics were not allowed to work due to health regulations by government.

Grenada has approximately 1400 buses on the road with all of them owned by private individuals.