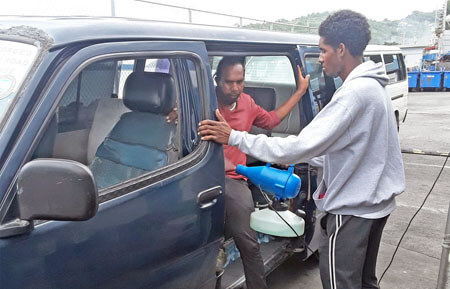 Contractor using a mister to sanitise buses arriving at the terminus

Bus owners in Grenada will have to deal with increased operation costs from this month.

They are now being asked to bear the cost of sanitisation of the interior of their buses and also the sanitisation of each passenger boarding their vehicle as part of the measures put in place by government to stop the spread of the novel coronavirus.

Up until the end of September, the Ministry of Health paid for and provided sanitisation services to every bus entering the St George’s bus terminus, at no cost to bus operators.

Despite this bus operators and conductors are refusing to adhere to regulations set out in the Public Health Act and the added responsibility of sanitisation is likely to put more pressure on them.

Currently, sanitisation is done using a machine and this allows buses to move quickly along however in the future operators will have to physically wipe down all seats in their buses before entering the parking area.

They anticipate that this will severely interfere with their operations.

The contractor hired by the Ministry of Health continued to provide the service all of this week however The New Today Newspaper was informed that the bus operators would have to engage the Minister of Health separately to lobby for the continuation of the free service.

Meanwhile, both commuters and bus operators are ignoring health protocols and face masks are not being used by most people who are traveling.

Bus operators have expressed difficulty with adhering to the protocols because it interferes with their ability to run their buses as they see fit.

Several bus conductors have said that passengers simply ignore their instructions to wear a mask and others do not bother to ask them to wear one for fear that they would lose the fare.

Once hand sanitisation costs are left up to the busmen more complications can be expected since some are planning to rely on the passengers to use their own.

The Public Act Regulations are now in effect and the police announced this week at a news conference that enforcement will begin.

The Regulations went into effect on September 14 but so far there has been no enforcement at the bus terminus in St George’s nor at business places where masks and sanitisation are now mandatory.

Assistant Commissioner of Police (ACP) Jesmon Prince said they will start with a soft approach to get people accustom to the regulations.

He said first they will attempt to educate the public about the regulations and police officers will be appealing to the public to comply before ticketing begins.

Breach of the protocols are liable to a fine of $500.00 if convicted in the Court. A person who is ticketed also has the option of not contesting and paying $350.

There are no active cases of COVID19 in Grenada according to the Ministry of Health but the likelihood of new cases has increased since the reopening of the borders and increased air traffic into the country, a return to normal business operations and the start of school.