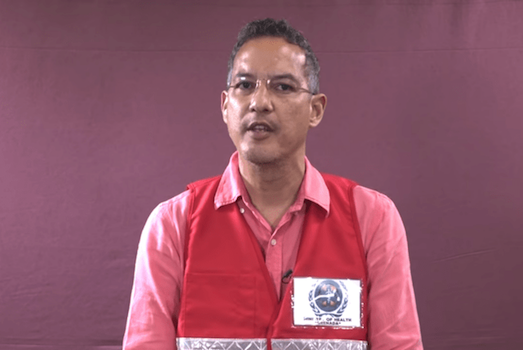 Health Minister Nicholas Steele has announced another positive COVID-19 case on the island but warned businesses that have been given the greenlight by government to provide “limited” service to the public that they face being shut down if they do not adhere to recommended protocols including social distancing.

The minister issued the threat in a brief address to the nation in which he disclosed that the island’s coronavirus positive cases moved from 19 to 20 with the latest person being associated with an employee of a workplace that had four previous cases.

The new patient was described as a 54-year old female associated with one of the other four positive cases from that particular business place.

Minster Steele said that this is a clear indication that there is a “possible workplace cluster” at that particular enterprise which was ordered closed by government over a week ago.

He stated that the business entity which he did not name will remain closed until the situation can be brought under control.

Speculation is rife that the business is a local mill in the Tempe area of St. George.

According to Minister Steele, the island has now moved into “a heightened activity level” because of the new developments as it relates to that particular business place and the number of persons affected by the virus due to its operation.

“We are currently working to mandating safety guidelines for different businesses given that we are seeing with this workplace from which we have five related cases so far,” he said.

The senior government minister spoke of government urging businesses that are allowed to open in this period to implement certain safety measures for employees but it is clear that this was not done in the case of that particular company.

“This particular company is closed for the duration of our tracing. We apologise to the general public and the direct stakeholders and beneficiaries but our actions in ensuring that the company stay closed are necessary in ensuring public safety”, he said.

This is a clear message directed at poultry farmers who are up in arms with government due to their failure to get feed for their chicken.

Minister Steele warned those businesses which fail to adhere to safety guideline about the necessary consequences for them as the face a possible shut down of their operations.

“We will ask you to close your doors until we are reassured that you are looking out for the welfare and health and safety of your employees and this nation”, he told Grenadians.

The minister disclosed that of the 20 COVID-19 cases discovered on the island, thirteen of the patients have now been declared as “medically recovered”.

One of the 20 patients is known to have fled the island unknown to local authorities by taking an international flight to Canada and then to his place of permanent residence in the United Kingdom.

Minister Steele told Grenadians that health officials have conducted 1200 Rapid Tests and 206 PCR Tests for the virus over the weeks which means that more than one-tenth of Grenada’s overall population has now been “screen and tested” for COVID-19.

“Those (tests) cover a broad range of geographic location and sections of the population. Many are contacts of positive cases and others are randomly selected or persons who have reported possible symptoms,” he said.