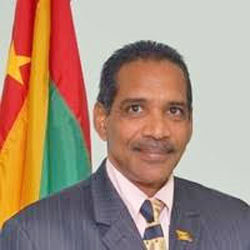 That is politics as they say.

This was the response given by former Attorney General, Jimmy Bristol who on February 1 was elevated to be among a select band of lawyers in Grenada who can now wear “Silk” in court as decorated Queen’s Counsel following reports that his elevation was blocked for the past seven years by Prime Minister Dr. Keith Mitchell.

Bristol was asked the question by THE NEW TODAY following a recent revelation by another former Attorney General, Cajeton Hood who stated publicly that the Prime Minister had vowed that not even under his dead body will Bristol get the QC status.

Hood claimed that the Grenadian leader made the vow while he served the ruling New National Party (NNP) government in the 2013-18 period as its principal legal advisor among the Cabinet of Ministers.

According to the former AG, Prime Minister Mitchell was also angry with him for allowing Bristol’s approval for QC from the Silk Committee of the Eastern Caribbean Supreme Court to reach as far as the desk of the Office of the Governor General who is the person responsible for issuing the letters of patent.

Bristol admitted that he had read the article written by Hood on the issue but that he did not know as a matter of fact that the Grenadian leader had blocked his elevation within the legal profession.

He said: “I know it was approved by the Silk Committee many years ago and sent to Grenada. I know that as a fact because I have correspondence from St. Lucia to that effect and it seems to have died a death when it arrived in Grenada.

“If it was in fact blocked that means they blocked everybody because if I couldn’t get silk that means nobody could come after me or others who may have been approved won’t be able to get it because then how then do you explain why I didn’t get mines – so I guess that probably put a little bit of pressure (to unblock it) – I was the cork in the bottle so to speak,” he told THE NEW TODAY.

Bristol went on to add: “I think pressure was building up. If it is that my thing (QC) was being held up for spite it was also spiting people who you might like too.”

The newly designated QC is known to have been a thorn in the side of Prime Minister Mitchell and the NNP administration in several legal battles in court.

Bristol was able to get a female high court judge to issue an order to access the bank account of the government to satisfy a judgment for one of his clients in St Lucia.

The client had purchased bonds that were floated on the Eastern Caribbean Security Exchange by government and when they had matured the Mitchell-led government had refused to honour the payment.

Attorney Bristol had also filed a motion in court seeking to block a move by government to amend the Grenada Constitution which was eventually turned down by a high court judge.

According to Bristol, if what former AG Hood wrote in the article that was published in the local newspaper about the role of Prime Minister Mitchell in the episode of his QC application then that is wrong.

He pointed out that if his elevation to QC status was being blocked by the powers-that-be in the Ministerial Complex at the Botanical Gardens in Tanteen then “that was a silly position to take” since it would have “disrupted the whole system of awarding the status of Queen’s Counsel to other lawyers who may have been deserving.”

Bristol noted that the system for conferring “Silk” on lawyers who excelled in the profession was agreed to by the heads of government of member territories of the Organisation of Eastern Caribbean States (OECS) many years ago and that a protocol was put in place for selecting those attorneys who reached the threshold for QC consideration.

He described the protocol as being “almost tantamount to a rule and is something that should be respected” by the governments of the respective OECS territories.

Bristol warned that no one should interfere with the functioning of the OECS court because the court as a juridical system is in itself part and parcel of that process for law and order that was agreed upon by the OECS heads.

“So if one government presumable does not follow the agreed procedure then it is an interference with the court. It will be disregarding an agreement among countries which is what it is. This doesn’t augur well for our standing,” he said.

The seasoned attorney-at-law conceded that over the years, some governments in the Caribbean have been known to interfere with the courts and the system of justice.

Bristol said that Chief Justice Dame Janice Pereira in her address three weeks ago to open the New Law Year slammed the politicians for interference in the Justice system in the OECS.

Pereira called on lawyers and the legal profession to move to defend the judges who are coming under attack from the powers-that-be in these small islands.

About three years ago, the Mitchell-led government had handpicked two local attorneys, Derrick Sylvester and Ruggles Ferguson to send their names to the “Silk Committee” of the OECS Court to be given QC status.

Former AG Hood and the then Solicitor General Dwight Horsford who is now the Attorney General in the British territory of Anguilla cautioned the government about handpicking members of the private bar for QC status as opposed to identifying lawyers in the government employ to get the title.

Ferguson later issued a statement saying that he would only accept the honour of QC if it came through the guidelines as set out by the “Silk Committee”.

Speculation is rife in St. George’s that the move to pave the way after seven years for Bristol to be conferred with the QC is intended to pave the way for some pro-government lawyers to send in applications to the Silk Committee.