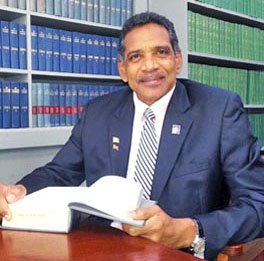 Former Attorney General, James “Jimmy” Bristol has said that the court system is not getting the importance it deserves because it is not considered as a “vote getter” by the current Keith Mitchell-led New National Party (NNP) administration as well as successive governments.

Bristol made the comment on a local radio station in light of the nonchalant manner in which the governments have treated York House which used to house the No.1 high court in Grenada before it was damaged by the passage of Hurricane Ivan in September 2004.

This is Prime Minister Mitchell’s third term in office since the destruction of the court by the hurricane.

According to Bristol, fifteen years later, a permanent solution is yet to be found and he expressed the view that the “recalcitrant” approach to funding is to be blamed for the current predicament of the court.

He said “the (court) system is fundamentally deficient and flawed not because as a system it’s not good (but) because the system hasn’t been given the care and consideration that it deserves in a democratic society and the first problem we have is one of funding”.

The former President of the Grenada Bar Association (GBA) pointed out that the problem is not unique to Grenada alone but there is the usual “recalcitrant” approach of Caribbean governments when it comes to funding regional institutions.

“They (governments) are deficient in meeting their obligations. So, we have had that historical behavioural pattern of successive governments and so, if the court isn’t funded then you get many problems (such as) infrastructural problems where you don’t have the physical buildings to house the courts, you don’t have sufficiently trained staff and you do not have the technology and that all comes together like a massive tidal wave and it washes through the system like a wave of destruction because the system doesn’t function,” he said.

“Our problem in Grenada is more compounded by the fact that Hurricane Ivan damaged our infrastructure and since then, we have been housing the court from one temporary place to the other and none of those temporary accommodations were suitable (and) so that has caused delays (and) backlog of cases…where people are languishing on remand in prison, waiting for trials and so forth  and so, it’s a most unsatisfactory position,” he added.

The longstanding attorney also pointed to the “deplorable” circumstances where “anyone who has had misfortune and having to seek redress before the court has experienced and that is the system doesn’t work”.

Noting that the court is one of the three pillars of the Constitution, Bristol said “in my view the reason why it has not been given the importance or the respect it’s entitled to, is because if the court system falls apart the people would then go to the politicians to solve their problems which would then give the politicians more power and I can see this happening.”

The outspoken attorney also admitted that he too has problems with the courts even though he is better equipped than the ordinary man to get around the system.

“I say to myself what’s the point in going to court and I am a lawyer, I know how to get into the system and get around it but it’s so frustrating (that) I am saying, what’s the point?”

Bristol is not “optimistic” of a speedy resolution to the court crisis or that the promised Clico building on Young Street in St. George’s will be ready in time for when the court resumes within the next few weeks.

The former AG said that his lack of confidence is based on what he describes as “the track record” of successive governments when he looks at the treatment given to the historical York House building which “is just sitting there” some 15 years after Ivan.

“That building (York House) could have been used to house two court facilities,” he said, recalling that “when parliament was there we used to use downstairs and on occasions we actually used the parliament for court”.

“They haven’t even cleaned it up – nothing was done, they have it still languishing…and it just shows a disinterest in systems, efficient processes and in getting things done for the betterment of the people,” said Attorney Bristol.