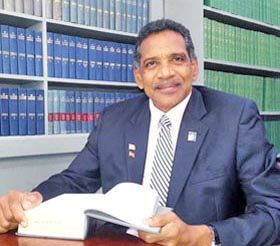 A former attorney-general on the island has called for the sacking of the General Manager at the Maurice Bishop International Airport, Wendy Francette-Williams and the entire Board of Directors of the Grenada Airports Authority (GAA), headed by businesswoman, Anya Menezes-Chow Chung over the incident which led to the downgrading of the facility this week.

The grim news became official on Tuesday when Minister of Tourism & Civil Aviation, Dr. Clarice Modeste-Curwen announced at a post-Cabinet press briefing that British Airways was forced to cancel its flight to the airport on Wednesday due to the downgrading of the Maurice Bishop International Airport.

Long-standing attorney-at-law, Jimmy Bristol who had a stint as a GAA Director said the incident was embarrassing to both Grenada and British Airways which would have lost a lot of money due to the forced cancellation of the Grenada leg of the flight.

“If that is the case – if that is true that we have been downgraded for the reasons stated namely that the Fire Services are inadequate, I think it is deplorable and I think the Airport Manager (and) probably the board should resign.

“It was unnecessary and avoidable. This is a major embarrassment to our country. This is an   embarrassment. We have had 6 months of lockdown –we had all the time in the world to make sure and to maintain our airport to the required standard and it just hasn’t been done.

According to Bristol, the fact that this was allowed to happen amounted to “a reflection in my view of poor management and it is dangerous”.

“It shows a lack of concern, a lack of planning, a lack of management skills and application,” he added.

Bristol who has years of experience in regional and international aviation matters questioned the readiness of MBIA in the current situation to handle international fights.

He said: “The thing is – do we know that the rest of the services are up to scratch at any given time? How safe is the airport? There is a lack of direction at the airport. The airport management and I will say the entire board really should resign – they really don’t know what they are doing.

According to Bristol, he has been advocating for years the separation of the Fire Service at the airport from the Royal Grenada Police Force.

He said the situation in Grenada is that the police force operates the Fire Service at MBIA and this in itself is totally wrong.

He argued that some police are trained as firefighters but are then transferred to serve at a moment’s notice in other areas of the police like traffic and immigration.

He said: “These fire officers at the airport are not employees of the airport – they are all police officers who are probably seconded – you need to have your own independent autonomous fire-fighting unit at the airport,” he said.

According to Bristol, from his own observations over the years, those in charge of running the operations at MBIA have been doing a poor job of it.

He pointed to a glaring situation at MBIA in which passengers from the Caricom bubble are mixing with passengers from outside the bubble who come in on international flights since the coronavirus pandemic started earlier in the year.

He said that these passengers are not separated and some are sent into quarantine while the “bubble people” are integrated into the local community.

“That is a lack of planning – there should be a separation,” he remarked.

Bristol dropped hints that the persons running the MBIA operation are not even sure of the exact geographical size of the property as the airport does not own the lands in the area.

“So you could be stopping people parking on the road, ticketing them, towing them away – do you really have jurisdiction? Do we know where the airport is? No one has bothered…something so important as to knowing the limits of your jurisdiction – they don’t care.

The airport was started during the 1979-83 period of the left-leaning People’s Revolutionary Government (PRG) of executed Prime Minister Maurice Bishop with substantial Cuban assistance.

When U.S and Caribbean troops stormed the island on October 25, 1983 to put down a military junta that had seized power in a bloody coup in which Bishop was killed, the airport was completed with funds provided mainly from Washington under President Ronald Reagan.

Following is the full text of the GAA statement on the downgrading of the international airport at Point Salines:

“The Grenada Airports Authority (GAA) has cited shipping delays for fire-fighting aggregates as the reason for its temporary change in status that affects the arrival of larger aircraft.

Despite its efforts to plan ahead for the resumption of international flights this month, the GAA is facing factors outside of its control. Having checked its inventory, the GAA placed an order for additional fire­fighting aggregates (foam/dry chemicals) on August 27, 2020 through its service provider.

The GAA was advised of a delivery time of five weeks which by calculation, was estimated to be the first week of October.

However, on October 7, 2020 the supplier advised the GAA that due to logistical problems, the shipment of the dry chemicals and foam was booked for departure on Thursday, October 15, 2020. The shipment is therefore expected to arrive in Grenada seven days later, on October 22, 2020.

As a result of this, the current category status for Crash Fire Rescue capabilities will be affected and will impact airline operators with larger aircraft which fly into Grenada, including, Virgin Atlantic and British Airways.

As a responsible aviation entity that focuses on safety and security, and in accordance with the standards set by the International Civil Aviation Organisation (ICAO), the GAA immediately advised airline operators of this issue.

The GAA has maintained constant communication with the airline operators and supplier on this matter as it awaits the shipping and arrival of the fire-fighting aggregates.

General Manager of the GAA, Ms. Wendy Francette-Williams gave assurances Tuesday that, “The GAA values airline safety and security as our first priority and we work in compliance with industry standards at all times. The timing of this is unfortunate as Grenada is just resuming international commercial flights after several months.

“We regret the inconveniences that may be caused to the travelling public, but safety and security remain our foremost guiding principles, therefore the decision taken is the correct one. We look forward to resuming the facilitation of Category E aircraft like those operated by British Airways and Virgin Atlantic in the not too distant future.”