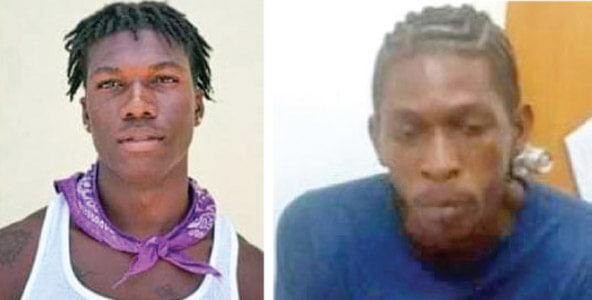 From (left to right) Raynell Coutain and Ronaldo George

Police believe that they have made a significant breakthrough into last Tuesday’s $35, 000.00 armed robbery at Big Mac in the south of the island.

According to a police insider, two persons from the Telescope area in St Andrew South-east have been taken into custody for questioning in connection with the broad daylight hold-up of the business place at Calliste in St George.

He said the suspects were turned into the police based on information provided by one of the mothers after seeing video footage of the persons who were wanted by the police to help them as part of their investigation into the criminal act.

He told THE NEW TODAY that the mother called an Inspector of Police who then came into the area to pick up the two suspects.

The insider said the persons of interest to the police were taken to the St Paul’s police station to be held in safe custody where they escaped from but were later recaptured.

RGPF had put out a bulletin asking the public for assistance in recapturing the two suspects who were said “may be armed and dangerous and should be approached with caution.”

Hours later, the police put out another bulletin informing the nation that the wanted men were back in custody.

It read: “The Royal Grenada Police Force extends appreciation to the general public for their assistance in locating wanted men Raynell Coutain and Ronaldo George.

“Both men have been apprehended and are back in police custody. Investigation regarding the offence of Robbery with Violence continues.”

The police insider disclosed that the two men now in custody for questioning have sold soursop to Big Mac in the past and are very familiar with the business place.

The police also intend to question the two suspects about a spate of recent robberies on the island.

Security cameras had picked up the suspects as they approached the area to stage the armed robbery.

Big Mac is engaged in the business of purchasing products from farmers mainly soursop and exporting them overseas mainly to the United States.