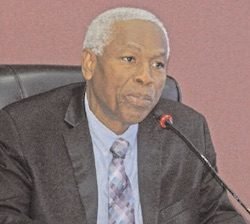 A ready market is seen as one of the benefits to be derived from a TT $3.4 billion pipeline deal signed between Russian oil outfit, Global Petroleum Group (GPG) and the National Gas Company (NGC) of Trinidad and Tobago to tap into resources in Grenadian waters.

Minister of Energy, Gregory Bowen told to reporters in an interview on Tuesday that the pipeline is expected to transport whatever gas is found in Grenada’s waters, as the NGC has agreed to purchase all of what is found.

“We have discussed from the highest level with Trinidad and Tobago and the investors in Grenada have met with NGC of Trinidad and Tobago, that’s over a year ago, and they have agreed to purchase whatever gas that we can exploit from our sea bed”, he said.

“You could either have large ships coming close to the platforms and transporting this to Trinidad and Tobago, but you could recover the cost of your pipeline over 20 years if you build such a pipeline to Trinidad. So, that is what we are doing and agreed to do, provided that we have… because everybody, even Trinidad after seeing the results figure there is something there,” he added.

GPG was contracted by the Keith Mitchell-led government in St. George’s to conduct the drilling process in search of oil in Grenada’s waters.

After drilling one well, Minister Bowen disclosed that the Russians have ran into financial difficulty and has now entered into a partnership arrangement with a Chinese company operating in the United States to continue drilling the remaining two wells.

He said: “So, we have two more wells to drill to complete the study, but the fact that Trinidad is doing so (building the pipeline) indicates that we do have something there. But we keep telling our people, let us be cautiously optimistic…don’t be counting our chickens before the eggs are hatched”.

When asked about the deal between GPG and the Chinese, the senior government minister noted that the confidentiality agreement signed between the two parties is a norm in the business world.

“…Don’t forget, if you are building a hotel in Grenada… the first one will be given a lot of concessions to come in – that we keep confidential both to benefit and protect your people because the other or the second coming in, you want to extract more for your people but if you broadcast what you did, they would say no I want this…”, he said.

“You know Sandals for example, you know every other hotel say I want the same thing as Sandals, so as they get to know, you affect your ability to extract more for your people. That protects the government in one way and at the same time…the confidentiality affects the investor because he is going elsewhere too, and they are saying Grenada extracted that from you, so I want this. In the business world, confidentiality clauses between agreements are really the norm. The part of the agreement that is confidential is mainly the commercial part,” he added.

Bowen dropped hints that the agreement between GPG and the Trinidad company covers a particular sale and purchase price but did not give details.

“…They have already signed unto an agreement of a particular price. I would not be able to disclose that and besides that’s Insider Trading, not so”, he said.