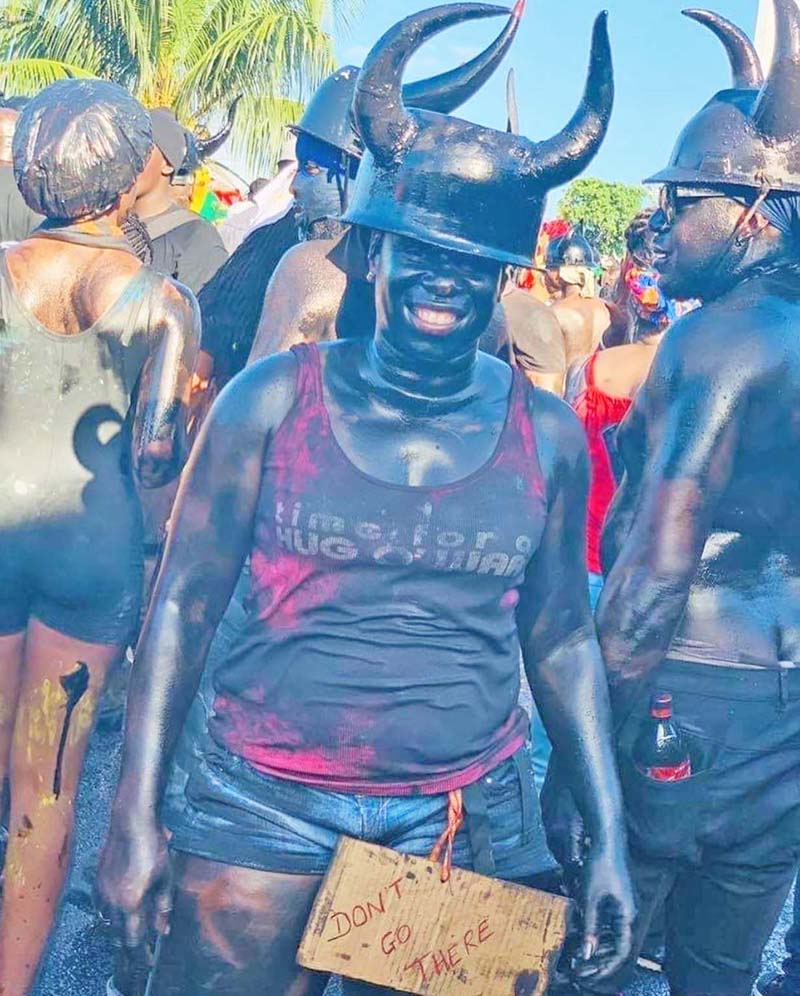 Press Secretary Philomena Robertson is captured on j’ouvert morning with her placard, "Don't go there"

Philomena Robertson, the current Press Secretary to the Prime Minister and a journalist with over 20 years of experience sat at a government held media briefing and unleash the most blistering attacks on journalists calling them out for what she perceives to be their lack of professionalism.

Philo, I am not going to cut corners – I am disappointed given your wealth of experience over the years. What baffles me though is what would have triggered this verbal assault on your colleagues.

This attack was unwarranted due to the fact that the majority of people attending these news conferences are not journalists. Just listen to what they say when they are asking a question: I am so and so the PRO from whatever Ministry.

Now that this is out of the way I am assuming you were referring to one particular individual. I am going to say to you as you portrayed on J’ouvert morning, “doh go dey”, which by the way was unprofessional.

One of the first principles of journalism is the public right to know and the journalist was within her right to ask of the Prime Minister if he is still free, single or disengaged. What was so hard about a yes or no answer?

Your role is not to be a personal bodyguard for the PM but to give factual information so that people can have confidence in their elected representatives. You just sunk the lowest of the low in my books as a former journalist.

I thought Barry Collymore was bad when he called me to kill a story about Peter David that was untrue but you are the icing on the cake.

If you want to be a Press Secretary maybe you should ask Nancy Mc Guire to give you a tip or two.

Now where is MWAG in all of this? This definitely would not get a pass under our watch – just ask Carla Rae Angela Briggs and Ray Roberts. MWAG should immediately call out Philo until she withdraws her statement and apologise to her colleagues and by extension the nation.

Journalists should as we did once boycott all government news conferences and activities until Ms. Robinson clarifies her statement.

I am not holding my breath when all of the people working in the media today learn the profession during a free trip to China.