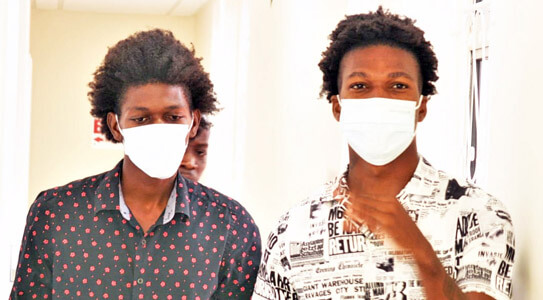 Two (2) 22-year-old fishermen from the Southeastern village of Telescope, St. Andrew are facing up to 30 years behind bars, after being slapped with the charge of Robbery with Violence in connection with last week Tuesday’s armed robbery of the Big Mac shipping agency in the South St. George village of Calliste.

The accused, identified as Raynell Coutain and Ronnaldo George, posted $100, 000.00 bail with two (2) sureties Tuesday when they appeared before Chief Magistrate Teddy St. Louis at the St. George’s No.1 Magistrate’s Court following the successful bail application put forward on their behalf by Attorney-at-law Henry Paryag, who is providing legal counsel for George.

Paryag, a former Magistrate, also held papers for Barrister-at-Law Anselm Clouden, who has been retained by Coutain.

The suspects are also facing charges of Money Laundering, and Possession of a Firearm, which was reportedly used to execute the daring daylight robbery in which $35, 000.00 was taken away from the business premises.

Tuesday’s hearing of the matter came days after the defendants, on the advice of Attorney Paryag, surrendered themselves back into police custody, after managing to escape from their initial arrest while being held at the St. Paul’s Police Station.

This has resulted in an additional charge of Escaping Lawful Custody being laid by the police against them.

The manner in which they escaped custody was among the concerns raised by the Police Prosecution team led by Assistant Superintendent of Police Glen Charles, who strongly objected to bail being granted to the two youngsters.

ASP Charles cited the seriousness of the offenses, and public interest in crimes of this nature, which tend to spike during the highly anticipated festive Christmas season.

The senior police officer also informed the Court that Coutain in particular, is also currently “on a bond to be of good behaviour from Grenville Magistrate’s Court.”

However, although he acknowledged the seriousness of the offenses, Attorney Paryag noted that according to the principles of bail, the defendants are innocent until proven guilty and contended that the Prosecution’s objections are not serious enough to deny bail to the suspects.

He also reminded the Court of its powers to impose strict conditions to the bail and the fact that “there are persons on bail for more serious offenses.”

Noting that the principles of bail are quite clear, Chief Magistrate St. Louis, agreed with the position of the defense and decided to grant bail with very strict conditions.

Both Coutain and George have been ordered to report to the Grenville Police Station daily, surrender all travel documents, and have no contact with the witnesses in the matter, which has been adjourned to March 27, 2023.