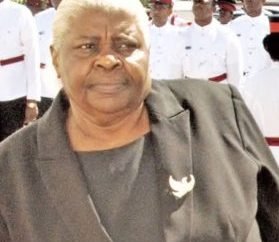 Beryl Isaac – a most trusted lieutenant

Less than two weeks after stepping down as Cabinet Secretary, retired senior public officer, Beryl Isaac is back in service.

Well-placed sources told THE NEW TODAY newspaper that Isaac has been appointed by the Governor General, Dame Cecile La Grenade as the new Head of the Public Service Commission (PSC), the body that is responsible for hiring and firing public officers.

A source who asked not to be named said that Isaac is due to attend her first meeting on Monday as a replacement for the long-standing Hudson Mc Phail whose service is not being renewed.

PSC member Prescott Swan has been performing the role of acting PSC Chairman following the decision of attorney-at-law, Derick Sylvester to step down from the post almost a year ago.

Isaac was brought out of retirement by Prime Minister Mitchell after he came back into power following the 2013 general election to take over as Cabinet Secretary after he decided to discard the holder of the post Gemma Bain-Thomas.

She was regarded within the public service as “a very trusted and loyal lieutenant” of the government and soon landed the key position of Head of the Government Negotiating Team (GNT) in salary talks with public sector unions.

Isaac is taking over at the PSC at a time when the commission is under a lot of fire for becoming “a rubber stamp” body for the Mitchell-led New National Party (NNP) administration.

A member of the 5-member body has expressed concern that meetings of the PSC have been relegated to only ratifying decisions taken at the government level on the appointments and transfers of public officers after they have already been done under the Mitchell regime.

According to the official about 90% of the business conducted by the commission during its weekly meetings on Monday is to give the official stamp of approval to things already done within the various government ministries and departments by the political directorate.

Isaac’s last major assignment for government as Cabinet Secretary was to hammer out the details of salary increases for 2020-22 with the unions.

The negotiations broke down about three weeks ago with the leaders of the Grenada Technical & Allied Workers Union (TAWU) and the Public Workers Union (PWU) refusing to sign over differences on the wording of the document.

In paying tribute to Isaac as outgoing Cabinet Secretary, Health Minister Nicholas Steele told reporters that Isaac’s “vast knowledge and experience on matters of public service allowed her to provide the best advice to ministers of government.”

Sports Minister, Norland Cox also told reporters that Isaac “will surely be missed, she assisted everyone” within the Cabinet of Ministers.

Isaac is known to be enjoying a full pension from her years of service as a senior public officer.