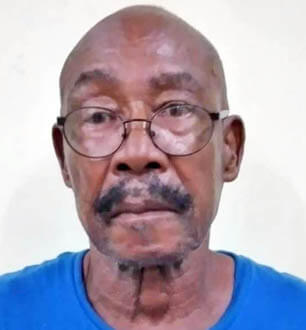 One week after being arrested as a result of a collaboration between local and Trinidad & Tobago law enforcement officials, an 81 year old Bermuda sailor pleaded guilty to the offense of Trafficking in a Controlled Drug, when he appeared for a second time on Thursday before Chief Magistrate Teddy St. Louis at the St. George’s No. 1 Magistrate’s Court.

Edmund Brangman, who first appeared before Magistrate St. Louis on Monday was apprehended last week Thursday following the seizure of two (2) kilograms of cocaine, carrying an estimated street value of $EC200, 000.00, along with US$4, 200.00, and TT$2, 407.00, on board his sailing vessel “Costa Mucho,” which was intercepted, and seized by police, just outside Belmont waters in St. George, after being cleared with Grenada Customs.

The Hamilton, Bermuda resident is also facing a Money Laundering charge, which was not read out to him when he reappeared in court on Thursday.

He was represented by Attorney-at-law Arley Gill, who expressed the desire to engage in further discussions with the Police Prosecution team before the Money Laundering charge is read.

The police did not object to the request, however, they applied for a confiscation order – an order made against a convicted defendant requesting him to pay the amount of his benefit from crime.

The court has also granted a forfeiture order, which refers to the act of law enforcement seizing financial assets from criminals who have acquired those assets through illegal means.

The 81 year old defendant, who attempted to shield what was visible of his face under a mask as he was escorted to and from court by prison officers on Thursday, is scheduled to reappear before Chief Magistrate Teddy St. Louis on March 21.