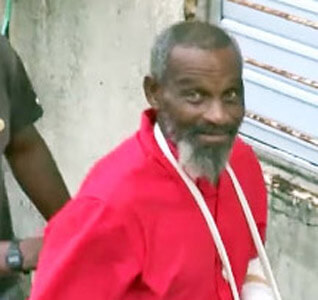 Police have slapped a charge of Non-Capital Murder against 59-year-old Labourer Godfrey Martin Simeon of Beaton, St. David, also known as ‘oos.’ who is accused of beating the 48-year-old mother of his children Sharon Williams to death in an incident that occurred outside her home in the same village on October 31.

The murder accused, who is said to be the father of three (3) of the deceased’s six (6) children, was captured by police investigators moments after the gruesome killing at a nearby river, bleeding from his left arm which was visibly fully banded, and on a sling, when he made his first appearance Wednesday before Magistrate Kina Marrast at the St. David’s Magistrate’s Court.

The suspect was unrepresented after spending close to four (4) weeks warded at the St. George’s Hospital nursing serious wounds, which were reportedly sustained during the fatal incident.

The 48-year-old mother became the country’s sixth homicide after sustaining repeated blows to her head with a plank, and several chop wounds to her body, some hours after being engaged in a heated argument with the suspect.

Williams had reportedly ended a romantic relationship with the ex-boyfriend who a decade ago had chopped and severed one of her hands.

Simeon who is scheduled to reappear before the St. David’s Magistrate’s Court to answer to the indictable Non-Capital Murder charge on December 14, had previously served a 7-year custodial sentence at the Richmond Hill Prison for the offense of Maiming and was released back into the Beaton community, where the deceased lived with her family.

He faces a maximum penalty of life imprisonment if convicted on the indictable murder charge in connection with Williams’s death.

After the incident, U.S-trained attorney-at-law Jerry Edwin had expressed the view that “the State has permitted gross neglect” for Williams by allowing Simeon to continue living in the same community where she resided after causing her serious harm.”

“The State failed in its duty to protect this victim when it permitted the person who spent time in jail for seriously injuring her, to continue residing in the same community,” said Attorney Edwin.

“We have to protect victims,” he told THE NEW TODAY, adding that “simply because a defense lawyer represents his client does not mean he turns a blind eye to the suffering of the victims or is not sympathetic to what the victim has endured, or does not think that the State has a responsibility to protect that victim and, I think that we dropped the ball here.”