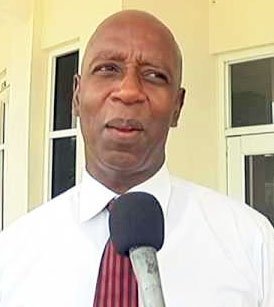 Leo Cato – the current Chairman of the GCNA Board of Directors

The ruling New National Party (NNP) government has set end of June as the date for the dissolution of the Board of Directors of the Grenada Co-operative Nutmeg Association (GCNA) and the Grenada Cocoa Association (GCA) and to replace them with a new company under the control of the Minister of Agriculture.

A source close to the meeting told THE NEW TODAY it was clear to both the GCNA and GCA delegation that the Keith Mitchell-led NNP administration has taken the decision that it is moving ahead with plans to liberalise the nutmeg and cocoa industries with or without the support of farmers.

He said that the plan which was put forward at the meeting seeks to get rid of both GCNA and GCA and to form a new company.

THE NEW TODAY understands that the proposed company will have a nine-member board with the Agriculture Minister Yolande Bain-Horsford having the power to appoint 5 of the Directors.

According to an industry source, Cato who is the Chairman of the GCNA Board along with Pastor Williams objected strongly to the manner in which the Mitchell administration was trying to seize control of the assets of the island’s farmers.

“We get the sense from the meeting that the government is hell bent on going forward (on liberalisation on its own),” he said.

He stated that the government delegation came to the meeting expecting the representatives of the farmers to sign off on the new arrangement and giving them the go ahead to proceed on the takeover of the industry.

He quoted one of the commodity representatives as saying: “…We don’t operate like this … not so fast. Everything has to be taken back to the farmers, let’s hear their concerns. They have a lot of questions to ask and to be answered. What happens to them? What happens to all the workers now?

The source said that after the engagement with the commodity board members, it was clear from the meeting that what the government side wanted was for them “to give blessing to their plan” to take charge of the industry.

He stated that there was no meaningful dialogue during the session as the government side seemed to be interested in minor details including what the farmers’ commodity bodies would like to see included in the new bill to be taken to Parliament to form the basis of the new ordinance to govern the nutmeg and cocoa business on the island.

The source pointed out that Cato and Williams refused to sign the lengthy document that was put before them and felt that the government had to be “joking” since it was only presented to them a few hours before the start of the meeting and that none of them had gotten an opportunity to study the contents.

“I said that I’m not a legal mind – I have to go through this thing first with my board and my legal counsel and give you a response. I said that you can’t be serious about this to me … that is ambush technique,” the source quoted one of the commodity board members as telling the meeting.

He stressed that all the previous studies done on the future of the nutmeg and cocoa industries in Grenada followed due process but the Mitchell government is now deviating from this and trying to rush the associations into agreeing to the setting up of the new company without looking at the ramifications for farmers and their assets.

“There is an urgency apparently to do that,” he said.

According to the source, it is becoming clear to the commodity bodies that the government does not want the GCNA to hold its annual general meeting at the end of June and to elect a new Board of Directors to take office from July 1.

He said it appears that there is a great degree of “urgency” on the part of the government to get rid of the boards of GCNA and GCA in their present forms within a matter of days and before the nutmeg farmers hold their AGM.

This means, he said that the Mitchell government is trying to ensure that the GCNA is not able to put a board in place to run the affairs of the association by July 1 in keeping with its own ordinance.

The source pointed to millions of dollars in worth of assets that are currently owned by the farmers and it is clear that the government does not want to give farmers any say in what happens to their own property.

“The proposed bill says that the new company will take over all these things,” he said.

“There is no consultation with the farmers who are really the stakeholders in this thing,” he remarked.

The source stated that under the proposed arrangement, the farmers stand to lose the Diamond Chocolate factory and a new restaurant that was set up to compliment the plant and to earn money for them.

The two entities, he said will no longer be owned and controlled by the farmers but taken over by the new company in which the government will be allowed to have a majority of the directors.

“We have objected to it. I don’t think that they sit down and study this thing,” he quipped,” one of the workers representatives was quoted as saying.

According to the source, the government side was “very tight-lipped” in the meeting and did not give out much details about the bill in the making.

“We intend to go through this proposed bill with our legal counsel line by line and then respond to them,” he said.

According to the source, GCNA will start Area meetings of the association with farmers within a matter of days as a lead up to the Annual General Meeting (AGM) in which a new Chairman and Board will be elected to run the affairs of nutmeg producers.

He said the issue of the new company as proposed and the attempt being made by government to dissolve the nutmeg board will be put to the farmers.

He noted that the farmers have spent too much money in paying back on loan taken out for the multi-million dollar Complex in the Lagoon in St. George’s to allow Prime Minister Mitchell and the NNP regime to take it over.

He said the same thing applies to GCA and the cocoa factory in light of the battle being waged by government “to take it over and give it away to somebody”.

Earlier meetings held between government and commodity board members used to have 2 persons each from GCNA and GCA but now it has been whittled down to 1 each from the associations.

The source believes that this is being done as part of a deliberate government strategy by the Mitchell regime to out vote the farmers on issues at their meetings.

He said that another meeting is scheduled for next Monday as the government side indicated that it will give the commodity representatives some more time to study the proposed bill.