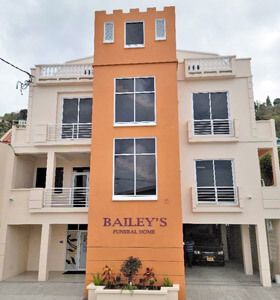 Bailey’s Funeral Home on the Carenage is at an advanced stage of its plans to build a modern crematorium and chapel on the island.

According to a well-placed source, the Crematorium will be erected at Richmond Hill, close to Fort Frederick and overlooking the Richmond Hill prison.

He said the plan is to start building the facility in January pending approval for the project by the Physical Planning Unit (PPU) within the Ministry of Finance.

He told THE NEW TODAY that the design will include an eco-friendly chapel with the use of solar panels to create electricity for lights and use of air conditioners in order to cut back on fossil fuel power consumption from the Grenada Electricity Company (GRENLEC).

However, the source pointed out that the furnace for the crematorium will be driven by gas and not electricity.

The official is confident of government approval for the project as there is only one house that will be close to the crematorium and the fact that the facility can be considered to be “an environmentally-friendly unit.”

“There is no smoke, there is no dust – there is nothing coming out, everything is filtered back into the system. The furnace that (we are) buying could go into the middle of a town in the city,” he said.

He stressed that the new crematorium will be strategically located and in close proximity to the only two cemeteries on the island with adequate space to still bury the dead – Morne Jaloux and Mt. Airy in St Paul’s.

“So it’s an easy drive to either Morne Jaloux cemetery or to Mt Airy cemetery,” he said.

Bailey has been using La Qua Brothers Crematorium to dispose of some of its dead.

The official also spoke of improvements since Covid-19 in handling the removal of dead bodies.

He said: “Long ago we just used to go and pick up dead, now we have to make sure and get the body certified of death before we go with it,” he said.

“Most times in the certification they have a Covid test done – the system has evolved properly if I may say that,” he added.

The official praised the Ministry of Health for doing what he called “a wonderful job” with the handling of Covid deaths in the past two years.

“The Ministry of Health has put things in place that it’s pretty safe now – you will know the status of a dead person before you go with it,” he said.