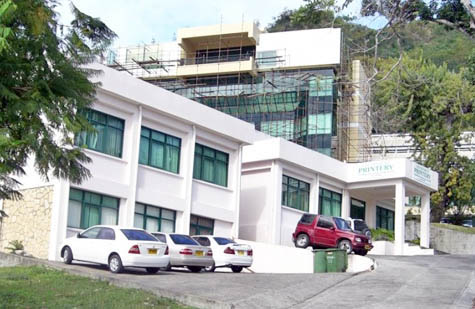 The Government Printery where workers are expressing concerns about their health

A senior public officer has claimed that there is no good and proper functioning government building on the island for civil servants to do their work in comfort.

The employee spoke to THE NEW TODAY as a COVID-19 team continues to go around the island to look at the state of several government ministries, departments and statutory bodies.

“None is good – all of them have problems,” said the worker who has seen the preliminary report prepared by the team for submission to Labour Minister, Peter David.

He said that public officers are working in terrible conditions in the mainstream of the government and that the buildings used by the statutory bodies are in much better shape for their employees.

He cited the Grenada Bureau of Standards (GBS) at Queen’s Park and the Housing Authority of Grenada (HAG) which have only “a few little discrepancies but nothing to talk about”.

According to the government employee, the visiting COVID-19 team has seen only a few discrepancies in some of these places but they are in relatively good and reasonable condition.

He said the problem with HAG is with its Sandino block plant at the entrance to Lance Aux Epines due to a lack of proper protective gears for male employees.

“The type of protective equipment that they give them is only the steel-tip shoes and a dust mask – they need a proper mask that has the respirators and the filters that will filter out what they’re breathing in with a lot of dust,” he quoted a team member as saying.

“They don’t have hard hats to wear. If they had the hard hats they were not wearing them. We saw a workman there – they say he’s a private contractor doing welding with no goggles on,” he added.

The worker disclosed that the Inspection Team will be recommending to the management of the Housing Authority that persons who come to the plant to engage in such activities should always work with their goggles.

He expressed fears that if the workman is damaged on the job site that he might not get compensation as he was not wearing his protective equipment and safety tools.

The senior government employee spoke of a serious problem existing at the Government Printery at the Botanical Gardens in Tanteen which need to be addressed urgently.

He pointed out that the workers there have a serious problem with Social Distancing given the size of the building and that the place can be described as unfriendly in terms of Occupational Health and Safety Standards for a workplace.

In addition, he said that the workers complained that the conditions at the Government Printery can compromise their lungs due to bad air circulation in the building and the situation there “could be detrimental” to their health.

“They say that the air quality there is horrible. They have a lot of machines and apparently they don’t have filters to bring out the fumes from the machines,” he added.

According to the government employee, another state institution that is laden with problems is the T.A. Marryshow Community College (TAMCC), the only state-owned tertiary education facility on the island.

He said that a full investigation is still to be conducted of the college but a preliminary look at some sections last week revealed some serious problems.

He disclosed that the electrical wiring at TAMCC appears to be old and called for the Ministry of Works to undertake an urgent inspection of the building.

“The electrical there has some issues – when you look at it you could see that the electrical is very old. And how it (the wiring) is run you could see it (was) a very old time, old fashion way in which the building (was) wired and it has a lot of load,” he said.

The official stated that the Administration section of TAMCC is in a horrible state.

He said: “When you look at the TAMCC building itself – the flooring board, you can fall through the board. If you are not careful there it is like the board is going down with you.”

The senior civil servant charged that the Management of the college has also failed to follow through on a promise to put up screens to protect the workers in light of the coronavirus pandemic.

He said the Secretary at TAMCC has no protection from the public including students who come to her office to conduct business.

“The students will come in and poke their heads in the face of the Secretary and she is exposed to them,” he added.

The visiting COVID-19 Health team told the Secretary to advise the students to stay some distance away from her as part of Social Distancing protocols to handle the virus.

THE NEW TODAY understands that following its exposure of the conditions at the Office of the Director of Public Prosecutions (DPP) two weeks ago that a crew from the Ministry of Works conducted a site visit to access the situation.

“The Ministry of Works was there looking at the DPP office and taking measurements – let’s see if anything happens,” said a well-placed source.

This newspaper had reported that the office was infested with termites which were eating away at several law books and that the toilet and kitchen were in terrible condition.

According to the employee, the Keith Mitchell-led government should really consider relocating the staffers at the DPP office since the place has become a health hazard for employees.

He said the workers have apparently grown accustomed to the scent in the building and as such are not smelling it themselves.

This newspaper understands that an old refrigerator is being used to store files at the DPP office.