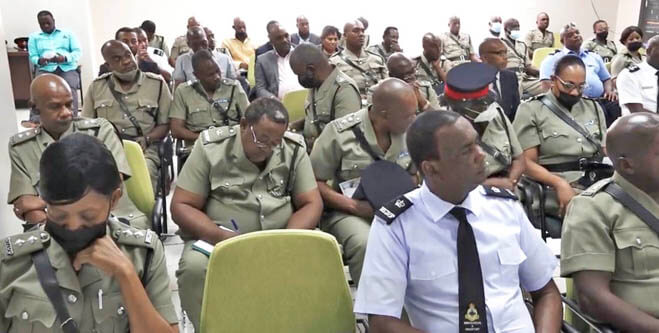 A high-ranking member of the Royal Grenada Police Force (RGPF) has described the current members of the High Command on Fort George as “the most inconsistent administration” to be put in place to run the affairs of the island’s leading law enforcement body.

In an exclusive interview with THE NEW TODAY, the officer who did not want to be identified said the officers who are now running the Police Force are not looking at the progressive development of the men and women in uniform in going forward “to fit the profile of a developing society.”

He accused the High Command members within RGPF of being engaged “in more protecting (the) interest of politicians than the interest of the people.”

“The police force is obviously for the people to ensure public safety but when you have a force that is almost completely turned into the protection of politicians that is a problem and it is a cause for concern,” he said.

The three top officers now in charge of RGPF are known to have strong leanings to the ruling New National Party (NNP) administration of Prime Minister Dr. Keith Mitchell.

The most suspect in the trio is Deputy Commissioner of Police, Michael Francois who has been given rapid promotion over the years after he was suspended during the 1990-95 period following allegations that he “purchased” a vehicle from a reputed drug baron in the Telescope area of St. Andrew.

Francois, who was a junior-ranking member of the Criminal Investigation Department (CID) when he was sent on forced leave, was immediately brought back into RGPF when current Prime Minister Mitchell came to power for the first time in 1995.

Two other key members in the Police High Command are newly appointed Deputy Commissioner of Police, Tafawa Pierre who landed the job after serving many years as head of the Financial Intelligence Unit (FIU).

Pierre is the husband of Education Minister Emmalin Pierre and from intelligence reports was given a directive by Prime Minister Mitchell to launch a criminal investigation into a former senior member of the 2008-13 Congress government on a scholarship that was awarded to his son.

The investigation allegedly reached a dead end as the government of Canada did not co-operate in a matter involving a citizen of their country.

The other questionable member of the High Command of RGPF is Assistant Commissioner of Police (ACP) John Moses Mitchell, a close relative of the Prime Minister.

The high-ranking officer told THE NEW TODAY it is sad that a lot of things done by the current members of the High Command are forced upon them mainly by politicians within the ruling party.

He cited the case of Constable Kenneth Sylvan who has been slapped with four (4) disciplinary charges following a complaint from Prime Minister Mitchell about a letter that he delivered to him threatening legal action over the non-payment of cost in a court matter from a law firm.

He accused the present officers serving on the Police High Command of “not seeing the police force for what it is – not for what they want it to be.

They want it to be a police force that is loyal to one man but it wasn’t meant to be like that,” he said.

He went on to say: “The administration (in RGPF) now because of the influence and the way they are (put in) position or hired… it has become more and more evident when people are hired now or appointed it is because of the assurance that they will be doing things in the interest of who the employer will be.

“…If you look at most of the people who they are putting in place, who is like on their side… they are people that they fly over others who are much more capable, much more efficient and much more dedicated to the job,” he said.

According to the senior member of RGPF, a lot of frustration currently exists at the moment among the rank and file members of the force over the kind of treatment being received by some junior officers from their superiors.

“…When Junior people seeing what is happening they are saying to themselves there is nothing for them to look up to.

Anything you are doing where people require performance appraisals you must give them something to look up to so they will work towards that – that in itself comes as a motivating factor.

If you have nothing there and you just doing things all over the place, people won’t be enthused in doing things – they won’t be motivated to doing certain things.”

The senior cop recalled that in past years, officers would stay around after their shift ended to do many other things for the force but at the moment they only do the normal 8-hour shift and leave as soon as the time reaches to get away from the station.

“Gone are the days when people used to make the extra sacrifice and get things done,” he quipped.

The senior cop is confident that if fair play exists within RGPF then the island will get a much better law enforcement agency.

He said: “…The force could be better managed if they focused on having the people who can do the job in position, you will get a better police force and you shouldn’t be thinking who is affiliated to this politician or that politician and that is what is killing the force.

The top cop also said that there is a feeling within RGPF that most of the heads of Departments police officers are “aligned” to the ruling party.

He pointed fingers at the Immigration Department where the head, Superintendent Leroy Joseph is the brother of Foreign Affairs Minister, Oliver Joseph, and also described the new head of FIU as being like “a portrait of Tafawa Pierre – that is why they left him there in charge.”

He said it is “all these kinds of little factors that are contributing to the mismanagement of the force and the mal-administration.”

The high-ranking officer was also critical of the island’s chief cop, Edvin Martin, accusing him of plain and open hypocrisy.

“He (Martin) will say something on the left side of his mouth and on the right side of the mouth he’s saying something different.”