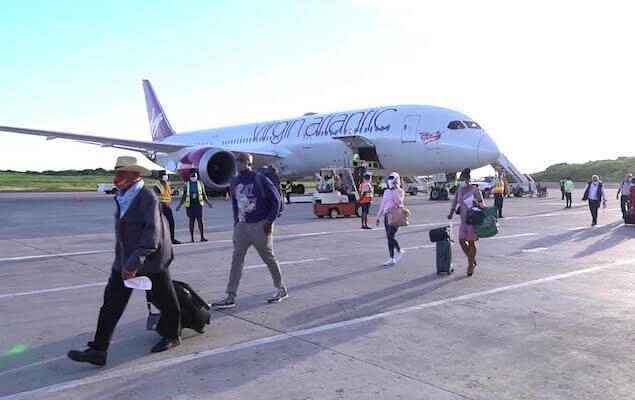 British Airways and Virgin Atlantic will stop flying to Grenada for the next month due to the lockdown in England due to a surge in the deadly coronavirus.

A well-placed source in the industry told THE NEW TODAY that the two airlines have sent messages to the relevant persons on the island informing them about the pull back in service to the Maurice Bishop International Airport (MBIA).

“The Virgin Atlantic flight today – coming in now – it’s in the air as we speak – will be the last flight in as well for approximately 4 weeks,” he said.

According to the source “Poor Loads” from the market in the United Kingdom might have also influenced the two major airlines to cancel their flights into the island.

Prime Minister Johnson has ordered England back into a national lockdown after the United Kingdom passed the milestone of one million COVID-19 cases and a second wave of infections threatened to overwhelm the health service.

The UK, which has the biggest official death toll in Europe from COVID-19, is grappling with more than 20,000 new coronavirus cases a day and scientists have warned the “worst case” scenario of 80,000 dead could be exceeded.

The source is not optimistic that after the lockdown ends that there will be a quick resumption of the service by BA and Virgin to Grenada as people might not be willing to book on the first 3 flights on resumption of regular flights into the Spice Isle.

“In the run-up to Christmas, very few people are going to be making early bookings to go away,” he said, adding that people will be more inclined to use their money to do things associated with Christmas like shopping.

“Grenada is going to suffer well into the New Year – they are not going to get forward bookings,” he told THE NEW TODAY.

In addition, he pointed out that many people will be at work and cannot just take holiday like that to engage in travel.

British Airways will not be flying to Grenada over the period November 12 to December 12 while Virgin has not given a date for the resumption of its service to MBIA.

The last BA before the lockdown is on Wednesday and most of the other islands in the Eastern Caribbean will see a cutback in their service with the exception of Barbados which is scheduled to accommodate three BA flights each week.

THE NEW TODAY understands that Virgin Atlantic is planning to continue to service the Barbados destination with one weekly flight during the lockdown.