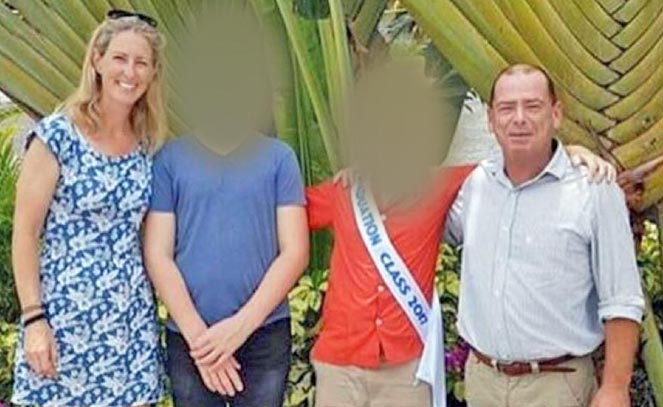 An Australian businessman living in Grenada has distanced himself from the white family of Donal Kavanagh and Sarah Hatton who have been charged by local police for Harm in connection with the beating of a black man in the well-to-do area of Fort Jeudy a week ago.

He called THE NEW TODAY on Monday to set the record straight that the two are not Australians and since the report surfaced linking them to his country, he had been subjected to threats from sympathisers of Evan Smith who was beaten in the face and body by Kavanagh and Hatton.

The two were charged early Sunday morning by Police for mauling Smith after the vehicle he was diving struck a dog owned by the foreigners that ran into the main road in Fort Jeudy.

According to the Australian, the incident has had repercussions for him personally as some people are pointing fingers at him as the one who beat up Smith since the couple are working on the same compound with him.

“I know these people – I don’t necessarily like them. I am a little bit concerned and frightened to be honest with you,” he said.

“I don’t sympathise with them, I think they are stupid to do what they have done. They should have left it in the hands of the police. They deserve what they get basically,” he added.

The businessman said that he is familiar with Kavanagh and Hatton since he works in close proximity with them at Clark’s Court Bay in the south of the island and was fearful that locals might now attack him due to the mix up with nationality.

He said he wanted Grenadians to know that Kavanagh is from Ireland and his wife is from Britain and not Australia as reported in some sections of the local media.

According to the Australian businessman, he had a run-in with the family before when they confronted him for parking his vehicle on a lot on the business compound which they felt should be reserved for them.

“We have never mixed with these people. We don’t mix with them socially – we don’t like them either,” he said.

“Justice needs to be done. If they have done wrong they need to be punished. I (will) tell you something – I will be keeping away from them because I totally disagree with what they’ve done – it’s against my principles,” he added.

Another foreigner living in Grenada told THE NEW TODAY that since the incident everyone that she has spoken to regardless of race or colour, strongly hold the view that the white couple had no right to take the law into their own hands.

“I have had interaction with them in the past and can attest to their racist nature,” she said.

The Evan Smith beating sparked protest action Saturday with locals taking to the streets to demonstrate with placards and chants in a peaceful march at Fort Jeudy demanding justice for the beaten local man.

A white European said that his daughter was “furious” over the incident and wanted to join the protest Saturday against Kavanagh and Hatton.

Referring to the couple as “stupid”, the businessman stated that it is unfortunate that an incident of the kind involving a dog should have sparked off such tension in the country in recent days.

“It was a stupid thing to do. What the hell are you thinking of? The people’s emotions are running high. We just hope that it doesn’t escalate. We are principally a peace loving nation. I wouldn’t want to be that guy in Grenada right now.

According to the businessman, he has seen Kavanagh before at his restaurant and never took to liking him.

The expatriate businessman believes that the white couple from Fort Jeudy should look to leave Grenada after the matter is dealt with in court.

The Fort Jeudy incident has highlighted the state of relations in the country between the black majority population and the so-called Grenada Whites and the white expatriate community residing on the island.

Several locals have been complaining of attempts to prevent them from access to beaches in some of the well-to-do areas in the country especially Westerhall Point, Lance Aux Epines and Point Salines.

The Keith Mitchell-led government has not issued any statement on the controversial issue.

However, acting Commissioner of Police, Edvin Martin on Saturday appealed for calm in the country as Grenadians took to Social Media to express anger over the beating of a local black man by a white family on the island.