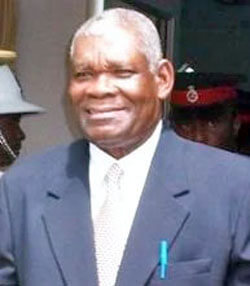 General Austin – headed the army since the March 13, 1979 Revolution

In an interview with THE NEW TODAY, General Austin pointed an accusing finger at Coard as the person who created the non-existent post of Day-to-Day Commander of the army for one of his close aides, Lieutenant-Colonel Ewart “Headache” Layne in order to usurp the power of the Commander of the Armed Forces.

He said that there was no such post as Day-to-Day Commander of the army which was reportedly entrusted to Layne.

“I never heard the term Day-to-Day Commander until I reached the court. That is the term that they used to usurp the functions of the Commander of the army. It was an invention of Bernard Coard – that was a Bernard Coard invention”.

Speculation is rife that the post was created by the Bishop Killers to provide legality for some of the actions taken by Layne on October 19, 1983 when the Prime Minister was executed on Fort Rupert following a squabble with Coard and his supporters over Joint Leadership within the then ruling New Jewel Movement (NJM).

A massive crowd stormed Bishop’s official residence at Mt Wheldale and freed him from house arrest and within minutes he was at the army headquarters on the fort meeting with several close aides.

Layne has admitted that he took the decision to send heavily armed troops to recapture the installation.

Initial reports from the coup leaders is that Prime Minister Bishop was killed in crossfire following a battle with the troops.

In outlining the rank of officers in the army, the General said that Bishop was the overall Commander-in-Chief of the Armed forces with him being second in line, followed by Layne as Deputy Commander of the PRA with responsibility for Defense, Lieutenant-Colonel Liam “Owusu” James as the other Deputy Commander of the army and in control of the Ministry of the Interior.

He identified the other officer serving on the army High Command as Major Einstein Louison who held the position of Chief of Staff.

THE NEW TODAY was told that under the rules of engagement for the PRA, the Commander-in-Chief, General and Chief of Staff were the persons entrusted with power to give the army the go-ahead to engage in war and not Coard, Layne or James.

Louison was known among top army officers as close to Prime Minister Bishop and not aligned to Coard.

However, both Layne and James were associated with a small cell group controlled by Coard called the Organisation for Revolutionary Education and Liberation (OREL) that is suspected to stage the palace coup in which Bishop was killed as part of their plot to take control of the 1979-83 Grenada Revolution.

In an earlier interview, General Austin disclosed that Coard had used one of Bishop’s overseas trips to remove Louison as Chief of Staff and hand the position to Layne.

However, the army boss said he made a successful direct appeal to Bishop to reverse the decision since he viewed it as part of a plot by Coard to gain more influence in the Grenada Revolution.

Austin also told THE NEW TODAY that Coard was able to get his two top Lieutenants Layne and James to take charge of the two key security portfolios in the government and suspected that they used to report to the deputy Prime Minister before briefing Bishop on these state matters.

General Austin was also asked to comment on reports that in the lead up to Bishop’s execution that Coard as Minister of Finance along with Layne, a powerful figure in the army had raised the pay of soldiers by EC$30.00 a month unknown to him.

He said that this was done when he was out of the country and totally kept away from him.

According to General Austin who also served as Minister of Communications and Works in the revolutionary government, he was never paid a salary as a member of the army.

Bishop along with three Cabinet Ministers ( and Jacqueline Creft) were executed following a protracted dispute with Coard’s rival faction on the issue of Joint Leadership of the revolutionary process.