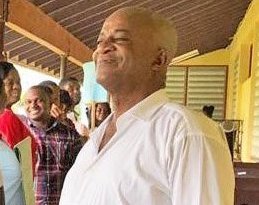 The move has not come as a surprise following a meeting last week between the governing Council and Prime Minister Dr. Keith Mitchell in which he vowed to take swift and decisive action to deal with the problem-plagued institution.

In an interview with THE NEW TODAY Wednesday, Vesprey said that he received a telephone call and not an official letter from someone in authority informing him that he has been removed as head of the ruling body in TAMCC.

“I haven’t received any letter but I have had a conversation. I don’t really want to say with who yet,” he added.

According to Vesprey, he was not surprised at the decision since he got an understanding from the meeting held with Prime Minister Mitchell that “there was no reason for me to believe that the Council that I chaired was going to remain in the position”.

He said that he does not know at this stage if anybody else has been fired from the body by government.

Vesprey indicated that he felt from the tone of the meeting that it was time to go due to a number of things that came up during the session.

He was not specific on the issues but stated that some of those things raised at the meeting “in some cases weren’t reflective of what was going on”.

“At that time I made my decision that I will not continue,” he said.

Asked why he did not submit a resignation letter and waited until he was pushed out of the job, Vesprey said: “In truth and in fact I was only doing the Interim Chairman work. I wasn’t the full Chairman, just acting Interim Chairman. I was aware from beginning that this wasn’t a relationship that would last for any long period of time.

“When the issue came up in the meeting, I did indicate to the Minister with responsibility for TAMCC (Pamela Moses) that that was my intention (to step down),” he added.

Vesprey went on: “I have given notice to the Council members on a chat that we have that I will no longer be the Chairman.”

The May 26 TAMCC crisis meeting also included representatives from the college and its council, Grenada Union of Teachers (GUT) the TAMCC Lecturers Association, along with Education Minister, Emmalin Pierre and Minister with responsibility for Tertiary Education, Pamela Moses.

A government statement later said that the intervention of the Prime Minister was sought after a letter was sent from GUT to Minister Moses, in which it outlined several issues including the lack of proper management structures, inadequate accountability and financial planning, lack of effective communication and irregularities in the hiring process at the college.

Dr. Mitchell told the gathering that the concerns raised must be addressed because they have direct implications “for the future of our children, their education and the overall development of the country” and that government intends to “treat the matter with utmost importance.”

“Some of the issues highlighted cannot wait for the report on restructuring. The Covid-19 pandemic has demonstrated that it cannot be business as usual and we must make tough decisions on the way forward. There are major issues at the college – the way it is managed, the hiring, process, salary level and lack of accountability. Together, we must take some decisions on the future of the college,” he told the meeting.