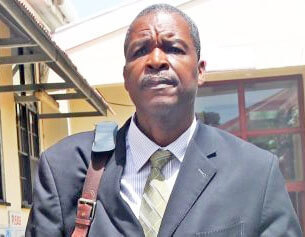 As Grenada commemorates 47 years of political independence from Britain, Grenadian-born American-trained Attorney-at Law Jerry Edwin is of the view that it is high time to discard all honourable references to the Queen of England to the dustbin of history.

Attorney Edwin, who operates the law firm of Eden Law Caribbean inside the Bruce Street Mall in St. George’s, expressed this view in an exclusive interview with THE NEW TODAY on the weekend, following the announcement of the elevation of longstanding Attorney-at-Law, James “Jimmy” Bristol, to the rank of Queen’s Counsel (QC), on February 1, nearly one week before the country was due to observe its 47th year of independence on February 7.

Edwin said: “When someone is recognised in the area of their expertise and they are recognised for their work in that profession, they ought to be congratulated. However, the irony is that the announcement comes just days, hours before the eve of Grenada’s Independence from the United Kingdom (UK) (and) it is to my mind disturbing that even as we celebrate our pride in our political independence from England, many of our professionals and institutions hold on for dear life to the tattered petticoat of Elizabeth and everything British.

“We could instead adopt the more mature position of an independent people and rename the high office of attorneys not as Queen’s Counsel, which is in and of itself, degrading but we should elevate ourselves in the process and rename the honour Senior Counsel in the manner that our friends in Trinidad and Tobago have adopted and not just there, in Australia, New Zealand and in Canada, where they have expressed their national joy in seeing the back of English royalty in all its dastardly forms. So, naming anything after the Queen is to my mind childish and immature,” he added.

Attorney Edwin went on: “Certainly kudos to him (Attorney Bristol)…he deserves the applause of the profession but I think as a mature people and as we celebrate 47 years of Independence from Elizabeth in England, it is high time that we discard all honourable references to the Queen and rename this high honour (as) Senior Counsel because the Crown of England, the Queen and all her titles should in my view be discarded to the dustbin of history and we as a people celebrate our freedom from the yoke of oppressive English rule, we should celebrate our people with our own honours.”

Now elevated to the rank of the Queen’s esteemed QC title, Attorney Bristol, who was called to the bar in England in 1989 and in Grenada in 1990, joins a handful of lawyers in the “inner bar,” qualified to wear “silk” robes in court as opposed to cotton robes worn by other attorneys.

When contacted by THE NEW TODAY on Tuesday, the newly conferred QC, who heads the law firm of Henry, Henry & Bristol, agreed that “it may be that the time has come to strike out on our own, so to speak” and abandon the use of QC in local court.

Bristol expressed the view that “there isn’t any harm in replacing the Queen with a type of system like a republic,” as seen in countries like Guyana and Trinidad and Tobago.

However, he pointed out that “when we do that we should move 100% (and) get rid of all of these Knighthoods and all these other honours that are bestowed and have our own…and not to have one foot in and one foot out (and) move to (having) appeals to the Caribbean Court of Justice (CCJ),” as opposed to having the British Judicial Committee of the Privy Council in England as the final court of appeal, which he described as “another thorny issue.”

“But certainly I don’t see anything wrong in aspiring to be truly politically independent,” he added, noting that “the world has changed a lot in the last 10 years…and I don’t think truthfully, when you look at what is happening in the world, that the British consider us as part of them because when you look the problems in England with the way the people from the former colonies are treated…do we really believe (that) in their handing out these honours, (that) they really truly mean it or should we really accept it…so, maybe now is the time to have a serious look.”

However, moving away from the Queen, who is the Head of State of Grenada and is currently being represented by Governor General, Dame Cecile La Grenade, can only be done through constitutional reform via a referendum/referenda, a process in which the entire electorate is invited to vote to adopt a new policy or specific law.

Prime Minister Dr. Keith Mitchell failed on two attempts with referenda in November 2016 and November 2018 to make amendments to the Grenada Constitution, which was handed down by England in 1973, with voters rejecting on both occasions to adopt the CCJ as the final Court of Appeal, which were among seven proposals on the November 2016 ballot in the first referenda and the only proposal in November 2018.

The seven proposals that were rejected by the electorate in the November 2016 referendum were:

(1). The Caribbean Court of Justice becomes the final court of appeal (as opposed to the Privy Council); renaming the Supreme Court of Grenada and the West Indies Associated States as the “Eastern Caribbean Supreme Court”; introducing a code of conduct for civil servants; changing the oath of allegiance so that allegiance is sworn to Grenada instead of the Queen. (CCJ and Other Justice Related Matters)

(4). Introduce fixed dates for elections, with the caveat that a vote of no confidence may trigger an early election. (Fixed Date for Elections)

(5). Changing the official name of the State of Grenada to “Grenada, Carriacou and Petite Martinique.” (Name of State)

(6). An expansion of the list of fundamental rights and freedoms. (Rights and Freedoms)