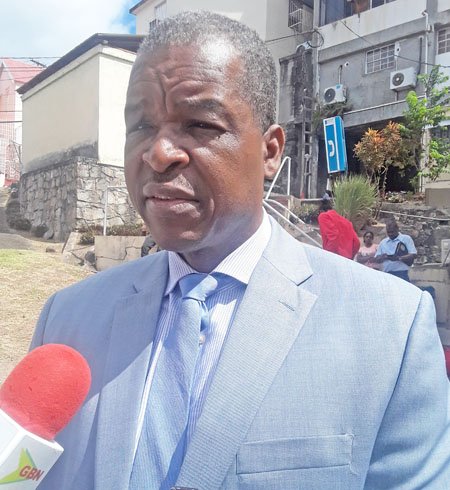 Attorney-at-Law Jerry Edwin has condemned what he identified as an “anomaly in Grenadian society,” where young people are deprived the opportunity to attend higher learning institutions unless they can prove that they have the ability to perform and the employment of several individuals in both the public and private sectors to hold down jobs for which they are not qualified.

“We are a society that have established hierarchies as our norm (in that) for somebody to progress up that step, (they) have to prove that they have the ability to climb because we are saying we will not help them climb. Now, there is something very destructive about that, in that the young person who has the capacity to learn cannot enter the doors of the highest education facility in Grenada,” Attorney Edwin said in an interview with THE NEW TODAY on Monday.

Edwin made the remarks Monday shortly after he exited the St. George’s No. 1 Magistrate’s Court, where he was unable to get Acting Chief Magistrate Teddy St. Louis to impose a court order that would have seen his client, 19-year-old Akim Andrew being sent to the T. A. Marryshow Community College (TAMCC) to persue academics in his chosen field.

His suggestion was met with strong objection from an expert in Mental Health, Dr. Augustine Panchoo, who expressed the view that Andrew, who did not complete his secondary school education will somehow be unable to perform as required at the tertiary level, especially with his diagnoses of Anti-social personality disorder, in which he ends up playing leading roles as opposed to fitting in and being the one that is led.

Edwin said: “Universities must be places where people learn – you don’t have to prove you are educated to get into an educational institution. It is an anomaly in our society here in Grenada 2020 that a young person who wants to learn…has to prove that they can get into TAMCC (when) TAMCC’s role is to teach them to improve their lives.”

The attorney pointed out that he himself was only able to obtain “two CXC passes,” but is now a successful attorney, which is accompanied by a plethora of other qualifications.

“My Math teacher told me I would get nowhere without Math. I do not have Math as a subject. Here in Grenada, there are persons in positions of power and authority that have no, no, zero qualifications for the positions they hold.

“We have people with fake degrees not just the one who is the Minister for Disaster Management, we have others…there are persons in Grenada that are completely under-qualified for their roles. We have for example a Director of Planning, I understand he is now suspended, who has absolutely no skills to lead that office.

“We have a Minister of Education who has no educational credentials to serve in the role, a Minister of Health that was a car salesman, nothing having to do (with Health). Now, I am not trying to say that Mr. Steele cannot be a good administrator but Ministries of Health (and Education) are in fact specific qualified positions (and) you can go throughout the Caribbean and you will see if you don’t believe me.

“These are medical doctors, persons who are trained in the medical field that have these roles. I see Mr. Steele opining on the Coronavirus, our Chief Medical Officer (CMO) should be the one talking about this. The Minister should have in fact just chaired the press conference and let the experts speak.

“Look at the case of Akim Andrew, he is not an outlier (but) a young man of rare skill and ability – we cannot ignore this. He may not have the support or the resources at home to be able to realise his dream and a psychologist has indicated that there are some personality issues that he is facing (and) I am saying (that) our Ministry of Health (can) devote a small scintilla of its enormous budget and resources to the Akim Andrew of Grenada, the young men who are not able let’s say, after high school to get into TAMCC because they don’t have five subjects because of some psychological impairment that they may have”.