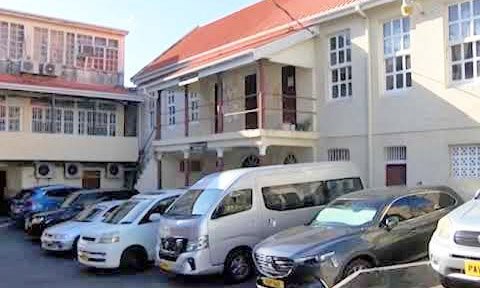 The mold infested building, which currently houses the Supreme Court Registry of Grenada

Outspoken Attorney-at-Law Anselm Clouden has described the mold infested Registry as a “death trap” and wants his colleagues to unite in protest against the lack of regard being demonstrated by those in authority for the legal profession, especially with the ongoing and outstanding crisis now facing the judiciary.

This was one of the issues Clouden addressed during a press conference Monday at his Lucas Street office of Grenlaw Chambers.

“The Registry is in a mess and it has been in a mess for the longest while…you have mold in there and it has been there for a long time (and) these books from since the 1800’s are all disheveled,” said the outspoken attorney.

According to Clouden, the state of things at the registry will soon worsen to “affect mortgages and the banks’ ability to conduct certain searches.

This, Clouden said is “because we haven’t become technological,” recalling that during the tenure of the late Carol Bristol, QC, as Chief Registrar of the Supreme Court of the Windward & Leeward Islands which was at the time headquartered in Grenada in the 1950’s, “he (Bristol) tried his best to get the Registry on an even keel and did certain remedial works here – retrofitting and the like but (now) it is in chaos and the building itself is unhealthy and it is going to cause people to get sick and die.”

The seasoned Barrister-at-Law also spoke of the manner in which government has over the years allocated millions of dollars in other areas at the expense of upgrading the court registry.

Clouden said: “…You don’t even have a court house where the people’s business could be properly addressed and justice administered according to law. “I don’t know why lawyers don’t take to the streets,” he said, adding, “we took to the streets when (Hugh) Wildman was here and we marched.”

Wildman is a former Director of Public Prosecution in Grenada, whose appointment in 2005 by then Prime Minister Dr. Keith Mitchell had sparked huge protest by lawyers of the Grenada Bar Association (GBA) in 2005.

Wildman also held many top level positions in Grenada including Special Advisor to Prime Minister Mitchell, Director of the Financial Intelligence Unit and Legal Advisor to the government.

“It’s about time we get marching again,” Attorney Clouden declared, as he pointed to the negative impact that the temporary closure of the Registry can have not only on the administration of justice but also on the revenue collection.

“It’s going to affect everything, it is going to affect government’s ability to collect revenue because (for example) you pay land transfer taxes but if you go over there with your deed it can’t be recorded then there are taxes to be paid, the court award cost when you go to pay those cost, fines when you go to pay those fines. So, it slows up the revenue stream,” he said.

“The judiciary is always deteriorating, we have temporary courts now (that are) just a little bit bigger than this office, it’s jammed, congested (and) crowded, but the Registry remains an unhealthy building, it’s not habitable for human habitation and they should be relocating that Registry with dispatch,” he added.

Clouden went on: “It’s about time that they (the authorities) take the entire Clico building, (which currently houses the Supreme Court) and put the Registry there, temporarily. Because everybody is talking about a Hall of Justice (but) I don’t know when it’s going to come.

GBA has issued a public statement on the mold condition at the Supreme Court Registry and the implications for staffers.