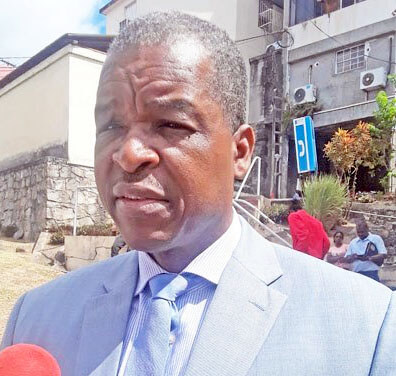 A Grenadian attorney who admitted that his client left a quarantine facility without clearance from health officials, has called into question the manner in which quarantine facilities are operated and the accuracy of COVID-19 testing in Grenada.

Jerry Edwin said his client, the 25th person to test positive for COVID-19 in Grenada, is not an “outlaw” who broke the rules and fled from quarantine.

The barrister-at-law held a press conference Thursday during which he admitted that his client did leave before receiving test results but only after following the protocols which dictate that individuals must remain in quarantine for at least four days.

Edwin said what passes for quarantine sites in Grenada are “stop-over hotels” without proper security measures, relaxed visitation from the outside and health officials who do not follow health protocols such as wearing PPEs, masks and gloves to interact with those in quarantine.

He said his client also shared a room with another person at the quarantine facility.

Edwin is also questioning the validity of the PCR test which was administered to his client which showed that he is infected with COVID-19.

Countries including Britain and Spain have returned millions of COVID-19 test kits to Chinese companies because they were defective and of unacceptably low accuracy.

Grenada  is also using Chinese made COVID-19 test kits and when the problems with the kits had been publicised some months ago Health Minister Nicholas Steele said he was confident in their accuracy.

The Chinese government had made a gift of COVID-19 testing supplies to Grenada at that time.

Case 25 who is now in isolation at a Ministry of Health location which his lawyer said is not a medical facility, presented a negative test result when he arrived in Grenada from Canada.

His lawyer said the man left quarantine after waiting for hours to receive his final test result and clearance and because he tested negative in Canada he believed he was free of infection.

The results were not available until two days after he went home and the lawyer said his client turned himself in voluntarily after being informed that he had tested positive.

Earlier this week, the Chief Medical Officer said case 25 had “circumvented” security arrangements at the hotel and left without permission.

Edwin said his client was able to leave because there was no proper security.

The Minister of Health has said the man and a second person who also left quarantine are to be charged for breach of quarantine.

Edwin believes his client will not be charged once the details of the situation are fully understood.

However Thursday afternoon Minister Steele told The New Today Newspaper, “We are certain in our position”.

Grenada’s entry protocols require a negative test from the country of departure, a minimum booking of four days at a local hotel and a COVID-19 test administered by local health officials, on day four of quarantine.

Each person arriving at the airport is also required to sign a document which provides for a maximum quarantine period of fourteen days.

However four days is actively promoted by tourism and government officials and there is speculation that the number of quarantine days were reduced because bookings to come to Grenada were low because of the expense for a hotel room.

Case 25 has been the focus of vicious verbal attacks on social media and on local talk shows and is being vilified by the public.

The country has been in a state of panic and hysteria after the news broke that the man had been mingling with people in several communities, including Tivoli where he has a rented house, Mt Rich and Hermitage in St Patrick where he is from originally.

One construction site has been shut down as well as a water bottling company over fears that he may have been in contact with workers.

Edwin also took issue with the public attacks against his client. He said he has already collected about 500 IP addresses of people who have been making negative comments and sharing his clients photograph on social media.

The lawyer also called on the Minister of Health to retract comments referring to his client as an “idiot”.

He suggested that the Minister was misinformed or paying too much attention to social media and not the facts of the situation.

Edwin’s position is that his client did not deliberately put others at risk of contracting COVID-19 since at the time he left and socialised with people he was unaware that he was positive.

“The message from the top has been irresponsible and uncaring,” Edwin said at Thursday’s news conference.

Case number 25 gave health officials the names of four people with whom he had been in direct contact and COVID-19 tests were administered on Thursday.

The results of those tests are expected sometime today. Among the four is an intimate partner of Case-25 and health officials say this is the person they are most worried about.

Edwin described his client as a family man with a wife and children in Canada who are concerned about him.

He also said his client does not want to get into a fight with the State and they are not considering legal action for breach of privacy.

Referring to charges expected to be brought by the State, Edwin said they are prepared to deal with any criminal charges.

Anyone convicted of breaching COVID-19 protocols enabled under the Public Health Act, is liable to a maximum fine of $10,000.00 dollars.