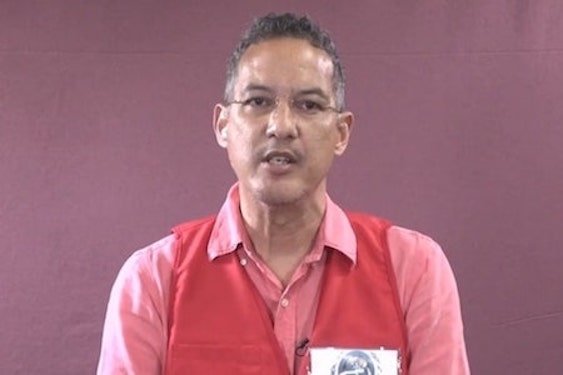 Less than 48 hours after claiming “significant success” in the fight against the deadly coronavirus, Health officials in Grenada have announced that the island might have witnessed its first community-based positive case.

In a mid-day address to the nation, Health Minister Nicholas Steele said that the island is awaiting confirmation from a PCR laboratory test which is expected sometime today.

According to Minister Steele, the person was hospitalised and tested on Friday and that while they are yet to get laboratory confirmation, they are presuming that the individual is infected.

He said that the employer of the person has been notified of the development and that employees of the workplace have been asked to go into self quarantine.

The Minister stated that local health officials have their work cut-out to determine how the person might have contracted the virus since he is not known to have had contact with any of the other persons who tested positive for COVID-19 in the past month.

It was disclosed then that seven of the thirteen people who tested positive have recovered and when tested again the results were negative.

All cases confirmed on the island so far have been imported or related to imported ones and health officials have increased testing – using rapid test kits – to try and gauge whether there has been community spread of the virus.

However, Minister Steele told the nation that this latest suspected case cannot be traced to importation.

“As of this moment we are treating the case as a presumptive positive. In that case and bearing in mind this is still early in the day, I deem it necessary to highlight the following probabilities and caution.

“Until now all confirmed cases of COVID19 cases in Grenada have been imported or import related. This current individual has no travel history and as yet, we are unable to determine that the individual has had any contact with those previously infected.”

Minister Steele admitted that they are concerned that there may be other people who have also been infected and not showing symptoms.

“I must also caution that health officials are also concerned that there might be other individuals who have not yet started to exhibit symptoms but who can be infected with the virus.

“There is also the possibility that other individuals are asymptomatic – that they are carriers of the virus but do not exhibit symptoms.

We must therefore prepare ourselves for a possibility of community spread of COVID19 in Grenada.

“We are encouraging all citizens to exercise heightened caution in the coming days and weeks, as health officials carry out their rigorous investigations and contact tracing from this possible case.

“While we have treated every case or possibility of a case as very serious, this particular one will call for increased vigilance because we are not yet sure of the point of contact.”

On Saturday, Minister Steele and doctors on the COVID19 response team, George Mitchell and Francis Martin were claiming success in containing the deadly virus that is sweeping across the globe, infecting hundreds of thousands and killing tens of thousands.

Grenada began to ease restrictions Monday that have been imposed to try and contain COVID-19, allowing a wide cross section of business to resume limited operations, including restaurants, utility companies, insurance houses and hardware stores.

This is being viewed by the public as premature since only a very small segment of the population – 116 – have been tested so far with plans to rapid test another 800 to 1000 over the coming days and weeks.

Grenada is known to have a population of 100, 000 persons and only a small fraction has been tested for the virus despite calls from the World Health Organisation (WHO) for “test, test, and more test” to fight the deadly virus.