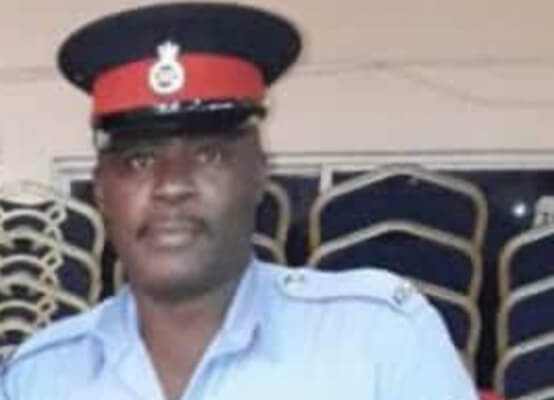 Less than 24-hours after the Royal Grenada Police Force (RGPF) recorded its first Covid-19 death, another policeman has succumbed to the deadly disease.

Dead is Corporal Andy Greenidge from Vincennes in St David who is attached to the Traffic Department of the police force.

On Wednesday, the Police Force informed the nation that Assistant Superintendent of Police (ASP) Byron “Donkey” Clyne passed away after being hospitalised for weeks from a stroke that was brought on by Covid-19.

THE NEW TODAY understands that Cpl Greenidge was in the Intensive Care Unit at the General Hospital for some time after being infected by the virus.

A police officer said that the fallen officer had experience in the force and had worked for years in Special Branch.

“It’s a sad situation,” he remarked.

There are reports that the vaccination rate among members of the police force is very low with just over 300 of the 1000 strong outfit taking the jab.

Central Police Station on the Carenage which is situated on the same compound as the Traffic Department is said to be the department with the most Covid-19 cases in the force.

Deputy Commissioner of Police Michael Francois told reporters just over a week ago that RGPF has been trying to follow the Covid-19 protocols put in place by the Ministry of Health to protect its members from Covid-19.

He said: “We are trying to do all that we can do to ensure that our work environment is safe. We have been sanistising all of our buildings. We have brought in a particular company that has been assisting us in sanistising most of our police stations.

In addition, he said the police officers have protocols to follow with respect to sanitisation, social distancing, wearing of masks and washing of hands.

“…We have also been following the distancing as much as possible to ensure that there are no clusters in any one place at a particular time. We have given instructions to all of the police stations about what must be followed.

‘We are also recommending to officers that they should get vaccinated. This is something that we have been going right around the police force and encouraging officers – it is not mandatory”.

The member of the Police High Command at Headquarters on Fort George disclosed that Covid-19 has been having an impact on RGPF and all police officers on leave have been called back to active duties “in order to augment all of the remaining staff to ensure that we can cover all of our operational requirements as we go through this period”.

“Yes, we are affected and will continue to be affected as other police officers get infected,” he said.

“As it stands we will like to get the fullest co-operation of the general public as we continue to ensure that Grenada remains safe in this period,” he told reporters.

The senior cop disclosed that the police force has put in place protocols for persons who are arrested and detained for offences as some of them are known to be Covid-19 positive.

“We are working closely with the Ministry of Health and the Acting Chief Medical Officer (Dr. Shawn Charles) and we have been testing all persons who would have come into custody for Covid-19 with Rapid tests and with other tests that the Ministry of Health would require as necessary and they are isolated from the general area that prisoners are held,” he said.

According to Deputy Commissioner Francois, officials at the Richmond Hill prison along with government’s medical team are also in touch with RGPF on the issue.

“… We are careful not to contaminate not only other persons in the police stations with respect to other prisoners but also Her Majesty’s prison.

“…We do have a protocol in place and we are following this protocol to ensure that we can have safety not only at the prison but also at the police stations.

“I want to assure you that we will continue to ensure that continues as we want to,” he added.