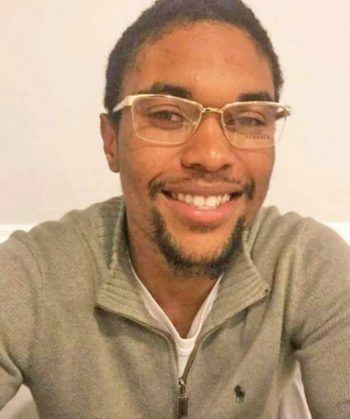 Kyle Clouden - did not live to see his 26th birthday

Known to provide noteworthy defense to individuals accused of murder, Barrister-at-Law Anselm Clouden now morns the murder of his own son, who was shot dead in Canada on the weekend.

24-year-old Kyle Clouden was gunned down just after 2:30 a.m. on Sunday in the parking lot at Wally’s hamburger Restaurant in the Hurontario St. Central Parkway area.

When contacted by THE NEW TODAY on Monday, the longstanding attorney, who is a Managing Partner at Grenlaw Chambers on Lucas Street, expressed sentiments of shock at the unexpected passing of his son.
“It has come as a shock to me. I am still in a state of shock…What can I say, I am saddened at the passing of my son and bereaved,” he said.

Attorney Clouden disclosed that he was not privy to the circumstances surrounding his son’s shooting death but indicated that Kyle’s mother, with whom he resided in Canada, informed him that their son was shot as he exited the parked vehicle.

It is understood that at the time of his death, Kyle was attempting to proceed to the eatery to join two (2) young ladies, who had accompanied him there and were already inside.

Canadian media outlets have reported that according to the police, at least one shot was fired but do not have a suspect description at this time and have called on anyone with information or dash camera footage between the hours of 2 a.m. and 3 a.m. to come forward.

Kyle is the second youth of Grenadian descent to be gunned down in Canada in recent times.

In 2016, the 17-year-old nephew of Daisy Hazzard, the current Public Relations Officer (PRO) of the Public Workers Union (PWU) was shot to death in the early morning hours of October 2016, at a pizza shop at 1937 Weston Road near Lawrence Avenue West.