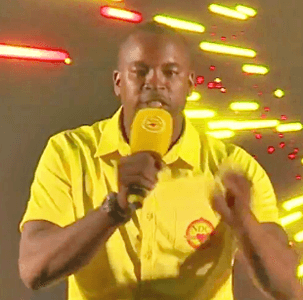 Candidate for the main opposition National Democratic Congress (NDC) in the South St George constituency, Andy Williams has fired back at Prime Minister Dr. Keith Mitchell who raised doubts about his prospects of being able to file Nomination Papers Wednesday for the June 23 general election.

Addressing supporters of the ruling New National Party (NNP) at a meeting in Mt Moritz in his St George North-west constituency, the Prime Minister said that he was sure that his candidate in the south, Infrastructure Minister Norland Cox will be on the ballot paper but the same cannot be said of Williams.

Dr. Mitchell stated that he had been hearing things about the Police and the Congress candidate who is a businessman by profession but did not elaborate.

Williams, the operator of the supermarket chain of stores known as “Hot Spot” has allegedly told Congress officials that the Prime Minister had personally called him to join NNP and contest the seat for the ruling party.

In addressing NDC supporters at the Tempe playing field on Sunday, the businessman who was endorsed to run on the NDC ticket against Cox disclosed that in June 2021, he was approached by NNP to get involved with them but chose to be associated with NDC, led by 44-year old attorney-at-law, Dickon Mitchell.

He said: “…The other side called me and wanted me to join their party, I said no. Dickon Mitchell and I spoke for about 2 hours – at the end I said this is the man. Grenadians, if we truly want to move this country forward the only choice is the National Democratic Congress and I say it with no apology.”

Williams also responded to the direct threat issued at him by Prime Minister Mitchell that he might not be around to file nomination papers.

He said: “You have heard the utterances of a very desperate man. He has sensed the direction in which the wind is blowing, he understands that his day of reckoning is fast approaching so he’s issuing threats. But this is what Dictators do – they lock up the opposition, they muzzle the press, they disrespect the ruling of the court and refuse to pay the people their pensions.

I have this to say – I will not be intimidated and I will not be distracted. I will be the next Parliamentary Representative for the South, for the people and by the people.

So, I want to send a message to them – tell Keith Mitchell, to tell Cox they can go to all the corners of the playing field but they cannot stop 6 runs. On June 23rd, let us vote early because Keith Claudius Mitchell must go home.”

The NDC candidate in the south also attacked the track record of the ruling party and its government for the lack of service provided in the south of the island in the past 14 years and that the area is plagued by problems one after another.

However, Williams said that opportunities do exist and this is the principal reason why he decided to enter into frontline politics to seek the support of the electorate to become the next Member of Parliament for the area.

“I truly believe that the South can lead in the economic and social transformation of Grenada. The South is the gateway and we have to lead by example,” he said.

According to Williams, he intends “to lead the charge” to tackle the massive unemployment problem affecting young people in the south of the island through the creation of various Job Fairs where the private sector can meet the unemployed people and “we can come together and let them have a conversation.”

The businessman turned politician believes that if this is done then these unemployed persons will be able to come closer towards getting a job and the private sector can in turn “come closer to getting individuals to join them.”

Williams spoke of plans to bring back skills training in the south of the island and every parish throughout the island as not every student is academically inclined.

He also called on business owners in the south of the island to do everything possible to create more job opportunities for Grenadians.

The NDC candidate also gave an undertaking to tackle as a matter of priority the issue of healthcare for residents in the south.

The aspiring politician also promised to create an educational institution to focus on the development of tourism and hospitality in the south.

Williams also criticised the current administration of Prime Minister Mitchell of building hotels in the south in which only the low-end jobs are given to Grenadians.

Williams also gave a commitment to ensure that an Alcohol and drug abuse Centre was built in the South to be run by trained professionals.

“I look around in my constituency and I see people suffering because of substance abuse, drug abuse.”

Williams also gave a commitment to create a viable fishing and diving industry with the building of a marine school to train Grenadian fishermen especially those in Woburn and Calliste in the south.