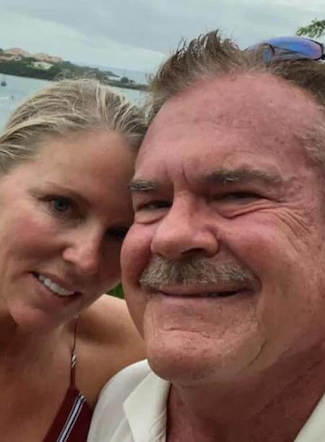 Dr. Tim McKinny and his wife

An American medical doctor and his wife who violated Grenada’s quarantine regulation and exposed about 38 persons to the deadly coronavirus earlier in the month, with one person testing positive, appeared before the St. George’s Magistrate’s Court this morning and were charged $5000.00 each for the offence.

The doctor, Tim McKinny and his wife appeared before Acting Chief Magistrate Teddy St. Louis and were represented by local attorney-at-law, Arley Gill who serves as Ambassador to Caricom with the Keith Mitchell-led government.

Director of Public Prosecutions, Christopher Nelson appeared on behalf of the State in the matter.

During the brief court hearing, the U.S citizens who have a house in the well-to-do Lance Aux Epines area in the south of the island, pleaded guilty to the offence and agreed to pay the fines on spot.

Dr. McKinny and his wife arrived in Grenada on November 1 and were approved for home quarantine by the Ministry of Health given his status as a medical professional.

However, they broke quarantine and visited four restaurants in the south of the island while waiting on their Covid-19 PCR tests that were conducted on November 5.

The tests came back positive and the Ministry of Health was forced to put its contact tracing team into full gear to visit the restaurants to get the names of staff and patrons who were exposed to the non-nationals.

An embarrassed Grenada Ministry of Health issued a press release within hours of the positive tests indicating that the Royal Grenada Police Force (RGPF) was notified of the incident “as per the dictates of the Emergency Regulations of Grenada enacted during this ongoing pandemic”.

The release went on: “The Ministry says home quarantine everywhere while being the internationally accepted practice has proven to be a less than perfect system”.

It says in the last week, understanding the lack of capacity to effectively monitor, test and provide timely test results to everyone who requests to quarantine at home, the Ministry drastically reduced the number of approvals granted.

“As in every challenge posed by COVID-19, the Ministry says it is continuously amending and improving its operations through comprehensive engagements with stakeholders to effectively control as far as possible, any potential spread of the virus”.

Grenada has a total of 41 confirmed COVID-19 cases since the virus was first detected on the island in March.