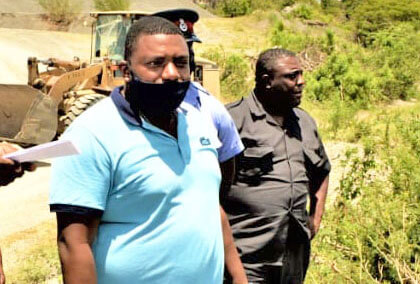 Jason Joseph –survived an assassination attempt by a lone gunman

The gunman who tried to assassinate Construction executive, Jason Joseph on Wednesday afternoon fired eight shots at him with only two hitting the target.

THE NEW TODAY understands that police are treating the incident which happened around 4.30 p.m. outside a house in Mt Parnassus as an attempted murder of Joseph, the son of the late prominent businessman, L.A Purcell.

According to a well-placed source, an X-ray that was done shortly after Joseph was taken to the St. George’s General Hospital discovered a bullet lodged in the area of the shoulder of Joseph but it was not considered as dangerous.

However, he said that a second X-ray done around 10.00 p.m. Wednesday night saw a second bullet somewhere between the heart and lungs.

The source stated that this bullet has apparently not punctured any of Joseph’s organs but is regarded as being in a danger zone.

He said that the businessman is very much conscious and “up and talking” at the hospital but held the view that they need to get those bullets out of him as soon as possible in case they are poisonous.

THE NEW TODAY understands that the team of police officers from the Criminal Investigation Department of the Royal Grenada Police Force (RGPF) who are looking into the incident do not have any suspect in mind at the moment for the shooting.

Related:  Fisherman waiting on RGPF for answers to his ordeal on sea with U.S Coastguard

The lone gunman launched his attack minutes after Joseph dropped off a family member in the upstairs section of his mother’s home at Mt. Parnassus.

The businessman is living in the downstairs section of the building.

The source said that about two minutes before Joseph arrived home a family member had spotted a young man wearing a hoodie walking down the gap leading to the house but did not become suspicious since the person thought that the individual was an employee who came to the apartment to wait on his boss.

Joseph is regarded as a key member of the CCCI outfit that runs the Mt. Hartman Quarry in the south of the island and is presently engaged by government to do several road projects on the island.

The source told THE NEW TODAY that after dropping off the family member, Joseph drove his vehicle in front of his apartment, parked up and was talking on the phone with someone when the gunman came up from behind and started shooting at him.

He said that Joseph did not see the person who fired the bullets at him as he did it from behind and through the windscreen of the vehicle.

He said that the family member who Joseph had dropped off a few minutes earlier heard the shots and ran out onto the verandah to see what was happening.

She saw a man running up the gap of the house and into a vehicle which then sped away from the scene.