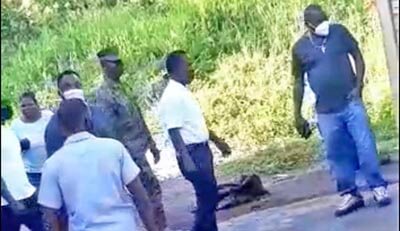 There are early signs that the St. George North-east constituency will be one of the most hotly contested seats whenever Grenadians go back to the polls.

The seat is currently held by Opposition Leader Tobias Clement who emerged victorious in the 2013 and 2018 elections on a ticket of the ruling New National Party (NNP) of Prime Minister Dr. Keith Mitchell.

Clement who has since crossed the floor is currently without a party.

The constituency was once considered as a garrison for the main opposition National Democratic Congress (NDC) until Clement defeated former Finance Minister Nazim Burke about eight years ago.

THE NEW TODAY understands that Prime Minister Mitchell is seen regularly in the area within the past month.

Video footages obtained indicated that the Grenadian leader was in the Willis area of the constituency on Tuesday afternoon where party supporters were engaged in a big cook-up.

An image was seen of Prime Minister Mitchell without wearing a mask walking through a small crowd that had gathered at a popular spot in the village.

One week earlier, the host of a local radio talk show, Kem Jones who is considered as an opponent to the Prime Minister held a public meeting on the same spot and the NNP regime came in for a barrage of criticisms from the platform speakers.

“We had our public meeting exactly the same place last week Thursday and the turn-out was massive particularly among the youth. He (Dr. Mitchell) had his secret police taking pictures and monitoring at our meeting,” said Jones.

Grenada’s Ambassador to Cuba, Claris Charles, a former General Secretary of the NNP, is said to be also heavily engaged in political work for the ruling party in St. George North-east and putting the structures in place for the candidate that will get the nod for the poll.

One of the contenders for the NNP is said to be retired New York policeman, Nimrod Olliverre who has been doing some political work in the constituency.

THE NEW TODAY understands that at least three persons from Congress, all executive members of the party, have an eye on the constituency.

The NNP won all 15 seats in both the last two general elections in Grenada.