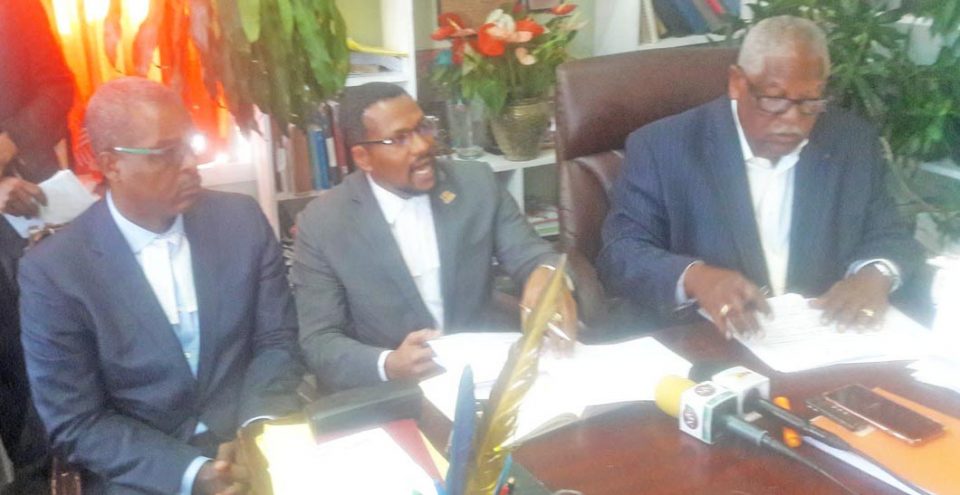 Seated at the press briefing from left to right are attorneys Jerry Edwin, Derrick Sylvester and Anselm Clouden

Several of the leading criminal defence attorneys in Grenada have waded into the island’s Guyana-born Attorney-General, Darshan Ramdhani over his intention to submit a bill for passage in Parliament to impose a life sentence on persons found guilty of committing rape.

Six of the lawyers assembled at the Law Office of top Criminal defence barrister-at-law, Anselm Clouden on Lucas Street in St. George’s to voice serious concerns about the bill in its present form that was circulated by Ramdhani to the Grenada Bar Association (GBA) for feedback.

The most vicious attack came from US-trained attorney, Jerry Edwin who described the proposed bill as “caveman legislation” that cuts across the constitutionally guaranteed rights of persons who should always be viewed as innocent until proven guilty by a court of law.

Attorney Clouden accused Ramdhani of attempting to make amendments to the Criminal Code which will result in a violation of “due process” in the criminal justice system.

“We have serious objections to the denial of civil rights of persons that have been protected by the Criminal Code”, he said.

The outspoken Clouden warned that AG Ramdhani was seeking to violate what he called “the protective mechanisms” in the constitution that ensures there is always due process in a court of law.

He described the changes as proposed by the chief legal advisor to the Keith Mitchell-led government as “tyrannical”, “alarming” and “unconstitutional” and promised that it would be fought to the very bitter end by lawyers in the country.

“The Attorney General wants to take us down an unconstitutional pathway. You cannot have a situation in which the Constitution is saying that you have a right to cross-examine witnesses but Ramdhani is saying you no longer have that right”, he said.

“You cannot pass a law which is violating the Constitution. The AG is attempting to take away the rights of our people and we will fight him everywhere”, he added.

Attorney Derrick Sylvester lashed out at Ramdhani by chiding him for demonstrating what he called “a lack of respect” to the Bar by asking for feedback at the last moment when he had already drafted the bill for submission to Legislators to pass through both the Lower and Upper Houses of Parliament.

“He (Ramdhani) is seeking to abrogate the law”, said Sylvester as he referred to the attempt by the island’s AG to prevent certain so-called Specialists to submit reports to court and not to be subjected to questioning by defence attorneys.

Under the proposed amendments, Ramdhani is suggesting that the Criminal Code should increase the penalty upon Summary Conviction for Indecent Assault from 5 to 7 years and indictment for rape from 30 years to life imprisonment.

Attorney Sylvester charged that the proposed amendments put forward by AG Ramdhani are in breach of rights of persons as guaranteed by the Grenada Constitution and “devoid of legal reasoning” and if not challenged would “take us down a path of pre-colonial days”.

He called on his legal colleagues sitting in Parliament to examine the bill as formulated by the Guyana-born lawyer to determine whether or not a dangerous precedent is not being set to take away the rights of persons in a civilised society.

He warned that if these lawyers on the government side fail to act and do nothing then “history will judge them”.

Among the lawyers in Parliament who are associated with the government are Minister of Legal Affairs, Kendra Maturine-Stewart, Foreign Affairs Minister Peter David and Senators Kim George and Cathisha Williams.

Attorney Sylvester dropped hints that AG Ramdhanni is seeking to tinker with the law due to pressure from the political directorate in the country because of public outcry following the slap on the wrist penalty handed down in the Grenville Magistrate’s Court by the presiding judicial officer, Nevlyn John on a U.S-based Grenadian who pleaded guilty to sexual offence committed against a 5-year old boy.

Director of Public Prosecution (DPP), Christopher Nelson has urged the Commissioner of Police to appeal against the sentence which amounted to a fine of $1500.00 to be paid to the State and $600.00 to the victim as compensation for medical expenses.

According to Sylvester, the Attorney General should better spend his time addressing some of the more burning problems and ills in the country like the state of affairs at the Richmond Hill prison where persons are kept in confinement after a sentence is handed down to them.

He spoke of inmates being forced to live with the stench of their waste after 4.00 p.m when the cells are locked daily, as well as the present over-crowded situation in the prison even among persons held there on Remand.

Sylvester accused Ramdhani of over-stepping the boundary in light of the recent “Sentencing Guidelines” handed down to govern the operations of the court in the Eastern Caribbean by Chief Justice Dame Janice Pereira.

Attorney Andre Thomas accused AG Ramdhani of seeking to introduce “draconian” and “unconstitutional” legislation in Grenada and of tinkering with the mechanisms in the judicial system that provides for checks and balances in a free and democratic society.

According to attorney Jerry Edwin, the nation should be put on notice that the Guyana-born legal mind is attempting to bring about unofficial “constitutional reform” by proposing changes to the Criminal Code.

He accused Ramdhani of pandering to criticisms leveled against the government on the various Social Media platforms in light of Magistrate John’s decision at the Grenville Court and of falling to “political considerations” and “pressure” that he was now threatening the very constitution that guarantees fundamental rights and privileges of the individual.

He said the law is clear that any expert witness who is called by the State to give evidence in a criminal matter should be cross-examined by defence attorneys.

Edwin added that Grenada is now running the risk of becoming “a prisoners’ state” given the implications of the changes to the Criminal Code as proposed by AG Ramdhani.

He suggested that the legislation should be recalled immediately and put on the “drawing board” for discussion with the Grenada Bar Association.

“Let us sit down and speak with the Grenada Bar”, he remarked.

Attorney Francis Paul was less diplomatic and called the bill as drafted by AG Ramdhani as “atrocious” in nature as the law is firm on the principle that every accused person is innocent until proven guilty by a court of law.

“This (amendment) is wrong and unconstitutional. People must be given a right to unfettered justice”, he said.

The lawyers have put the Mitchell-led government on notice that it will face a series of constitutional motions in court if the regime goes ahead and pass the amendments to the Criminal Code as proposed by AG Ramdhani.