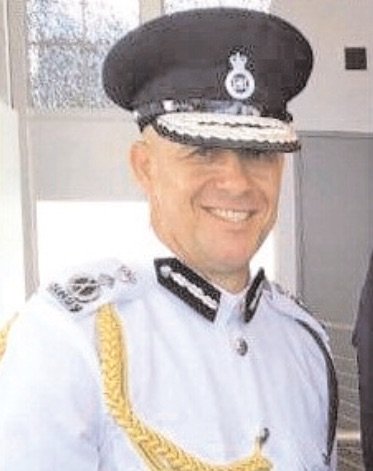 As reports circulate about the hospitalisation of Acting Commissioner of Police, Edvin Martin, Minister of Health,  Nickolas Steele has assured the nation that everything is in order at the hierarchy of the Royal Grenada Police Force (RGPF).

Minister Steele’s comment at Tuesday’s weekly post-Cabinet Press Briefing at the Ministerial Complex conference Room, was the first by government on the illness of Commissioner Martin following widespread news in the country that the island’s top cop had fallen ill on the job.

THE NEW TODAY understands that just after returning from a health check-up in Canada, Martin suffered a mild stroke and was hospitalised for approximately three days.

Minister Steele declined to give the nation an update on the health condition of the Acting COP, noting that this should be left up to the family.

“As Minister of Health, I believe that the patient’s privilege must be maintained – I am not acknowledging anything with the Commissioner of Police or not, but I think it is up to families of all of our patients to decide on what information they would like to make public or not”, he said.

According to a police insider, Commissioner Martin had worked late into the night and had been complaining of having headaches before he fell ill.

The insider indicated that ACP Michael Francois is senior to ACP Prince and would take over from him on his return to work from leave.

The other ACP is Trevor Modeste and he is believed to be on pre-retirement leave from the force.

Minister Steele declined to give reporters any information to their queries on who is actually in charge of running the police force.

“That would be for the Royal Grenada Police Force to make the announcements but everything is in order there. I can say that as far as I am aware within our force, our force is ably equipped and is being managed right now”, he said.