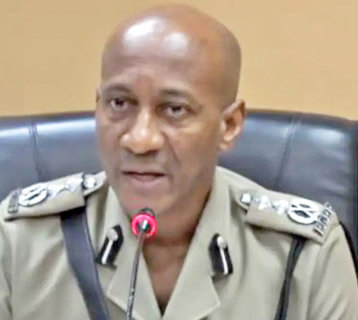 Assistant Commissioner of Police (ACP), Jessmon Prince has been appointed to serve as the interim Chief Executive Officer (CEO) of the Grenada Transport Commission (GTC), a statutory body that was created by the Keith Mitchell-led government to manage the reform of the transportation sector.

Transportation Minister Norland Cox, who made the announcement Tuesday during the weekly post-cabinet media briefing in St. George’s, expressed confidence in ACP Prince’s ability to head the Commission, which legally replaced the Transport Board by an amendment to the road traffic legislation in October 2020.

The commission is mandated by law to manage, and address the many challenges faced by the evolving transport sector.

Minister Cox said: “ACP Prince is well-known with all our stakeholders. I spent extensive time working with him in Spicemas. We believe that his competency, expertise, and experience augurs well for this important transition…”

“We believe he has a vast knowledge of the workings of the sector, and a relationship with a wide cross-section of stakeholders to start that important process of reforming the transport sector,” he told reporters.

The senior government minister, whose portfolio also includes Implementation, spoke of several projects in the pipeline that will require the expertise of ACP Prince, who is the former head of the Immigration Department within the Royal Grenada Police Force (RGPF).

This initiative is aimed at developing a sustainable public transport plan including gender-responsive, and socially inclusive measures, as well as short, medium, and long-term investment strategies to increase the viability, efficiency and quality of public transport services to meet the needs of the public.

At an earlier press conference, the minister explained that this project, which commenced in September under the consultancy of a Barcelona, Spain-based consultancy firm called MCRIT, is expected to investigate more closely the key issues affecting the quality and efficiency of road-based public transport services, recommend an action programme to improve the system, and examine options for sustainable public transport to reduce environmental impact, including mitigation of greenhouse gasses, as well as propose appropriate institutional framework comprising legal, regulatory, and policy measures, together with practical investments.

According to Minister Cox the transportation sector study is complemented by another CDB-funded ‘engender’ project, which will assess the “social component,” looking at ways to enhance access to transportation for women, the elderly, children, and persons with disabilities.

“We have a number of important projects that will be coming on stream, so, he (ACP Prince) will be key in the administration of these projects, and seeing them through,” the Transportation Minister told reporters Tuesday.

As Chief Executive Officer of the GTC, ACP Prince will work along with the 7-member GTC Board of Directors, which has been appointed to serve for three (3) years in the first instance. The body is headed by Lawrence Samuel, with Ronald Hughes as his deputy.

The Commission is expected to advise the Minister on all matters pertaining to road transport and traffic, including transport rates, fares, tolls, dues, other charges, as well as advise the Ministry about license duties, and fees in respect of motor and other vehicles and the needs of any area or areas concerning traffic (including the provision of adequate, suitable and efficient services and the elimination of unnecessary or unremunerative services), and the coordination of all forms of passenger and goods, transport, road safety, the regulation and control of traffic, and regulating road transport.

Other areas for which the members are expected to advise the Minister include standards to be prescribed for vehicles to be used in public, commercial, and private transportation, regulation of public transport infrastructure, including car park facilities, terminal facilities, bus-stops and roundabout facilities; measures for controlling public, private and commercial transportation, and establishing conditions under which they may operate, and any other matter affecting traffic or transport that the Minister may refer to the commission.